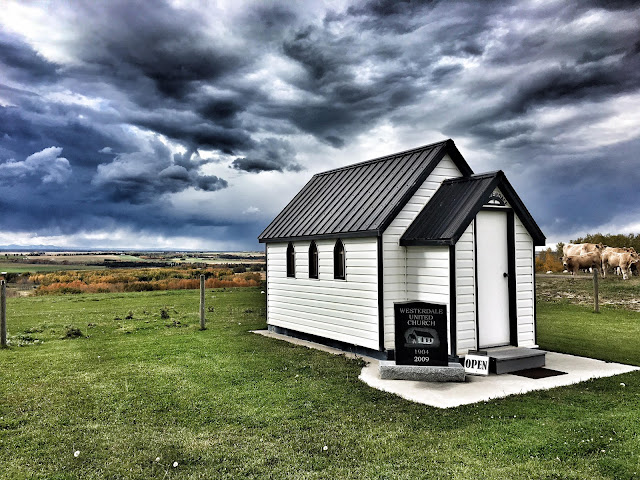 If I have the time I will try and take back roads while travelling.  Sometimes an hour trip by main road can take double or triple the time.  I don't mind.  This September day I was travelling from Calgary and ended up North of Olds.  I came to an interesting crossroads in my journey.  Literally, not figuratively.  I spied a cemetery, tiny church and an old school...WIN!  There was also a newer community hall and a ball diamond and many many cows.

I pulled over by the tiny church and made my 6 year old come with me inside with me.  We looked around (this didn't take long) and then signed the guest book.  While I was reading some info on the wall, my son also signed the bible.  When I saw what he was doing, I started yelling REPENT! REPENT! but he didn't understand what that meant, so the moment was lost.  Sorry, United Church. 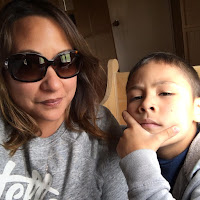 The original church was completed and dedicated on June 16, 1904 as the Westerdale Methodist Church.  It became Westerdale United during the Union of Churches in 1925.  Ministers from surrounding communities served Westerdale, services were irregular in the 50's.  In the 60's Westerdale became part of the Ennerdale Mission field and was served by theological students. Services resumed in 1971. This pioneer church became a bit of an attraction, however 1979 saw the organ and guest book stolen and lead to the doors no longer being always open.  A new organ was donated and music continued to accompany the services.   I am not sure when services ceased but by 2009 the building was in disrepair and could not be saved. It was torn down.  Citizens built this replica to stand in place of their beloved church.

Also if I ever get married, I know a cute little venue.