A Quick Jaunt Through Jarvie and Area

On our travels last weekend, we were on a pit stop when it was mentioned by a local that a nearby town had an old General Store. I'd like to think I am familiar with many places in Alberta, even if I haven't been to them I might have heard the name or know roughly where it is. Well, Jarvie was new to me, and it reportedly had a cool general store. We all know 'cool' is subjective, so best to check it out in person.

We rolled into Jarvie, saw an old church, another old building...no idea what it used to be, a speeder, and then the Jarvie General Store. We even drove into a park where there is a Bat & Bird Conservancy.

Here are some images of Jarvie, old and new! 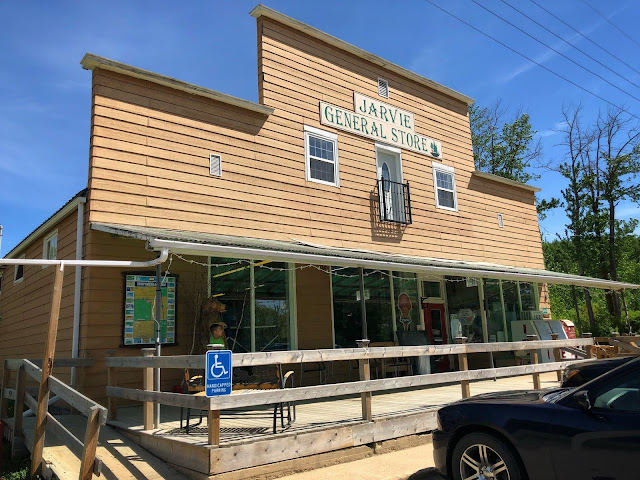 At the store, we asked about the area and were told about an old school not too far away...excellent. Directions were, turn right, follow until you get to a 'Y' in the road, stay left, then there will be a 'T' in the road...we managed to find it after a few kilometers of horribly rutted, not great for cars, kinda road.

Behind the trees and bees and mosquitoes is what is left of Cedar Creek school. My 'source' says this was a log school built in the mid 20's and opened in 1928-29. It doesn't appear to be log, looks like milled lumber to me but what do I know. I wasn't about to go and inspect it any closer, that's bee territory now. 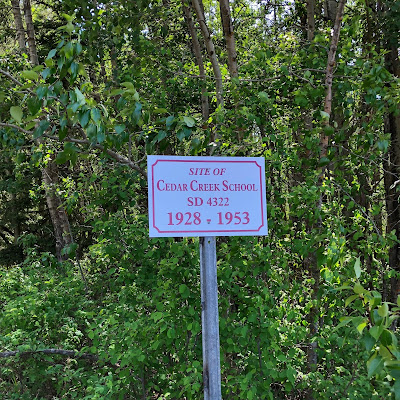 Also in the vicinity was an odd A-Frame house, the kind you expect to see on a lake or in a mountain resort. There is a summer village on a lake a few kilometers away.


Know anything about Jarvie? Let me know!

References: Pioneering With a Piece of Chalk; Provincial Archives or Alberta
Photos taken on May 26th, 2018
Posted by Jenn at 12:21 PM 18 comments:

I see a lot of barns. A LOT. I like the ones that are all alone, I am sure they used to be part of a homestead. I try to picture these busy homesteads and can get carried away with all the 'I wonder whys'. I wonder when I wander.

Here are some barns we saw on 2 separate trips. All NW, W and SW of Edmonton. No stories or anything just some cool barns. 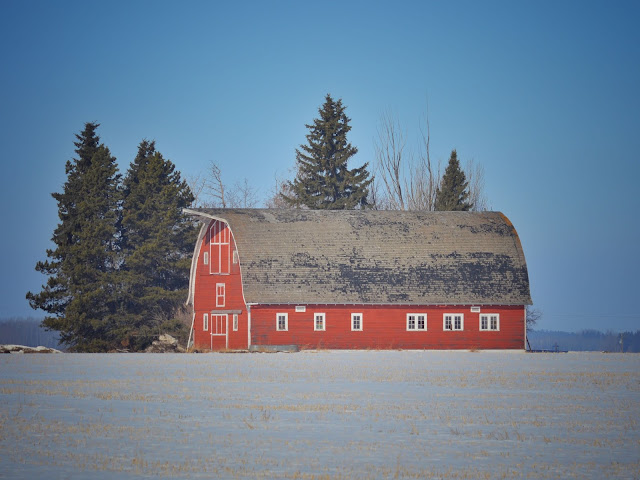 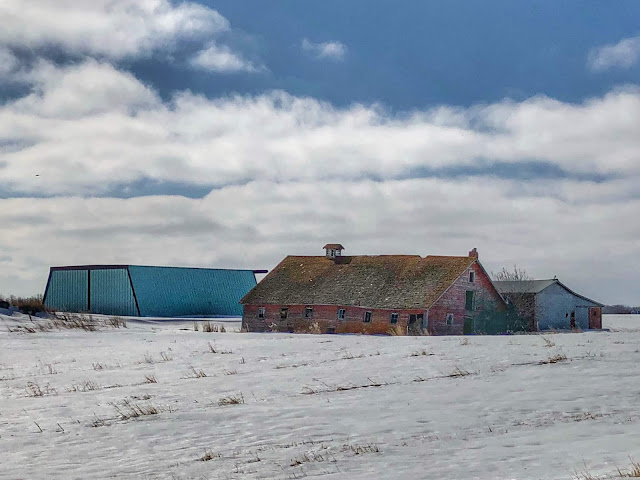 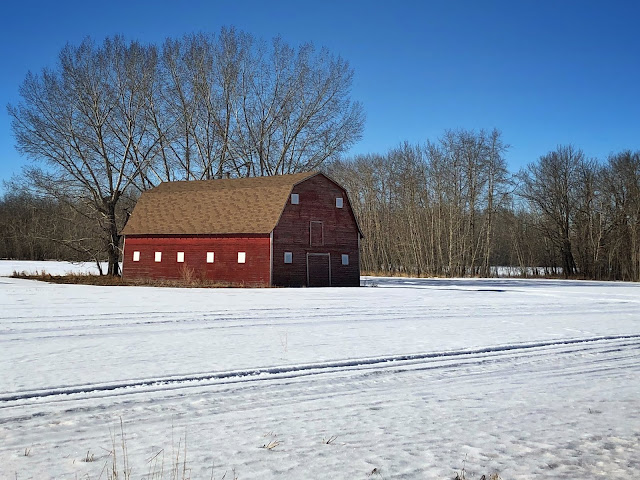 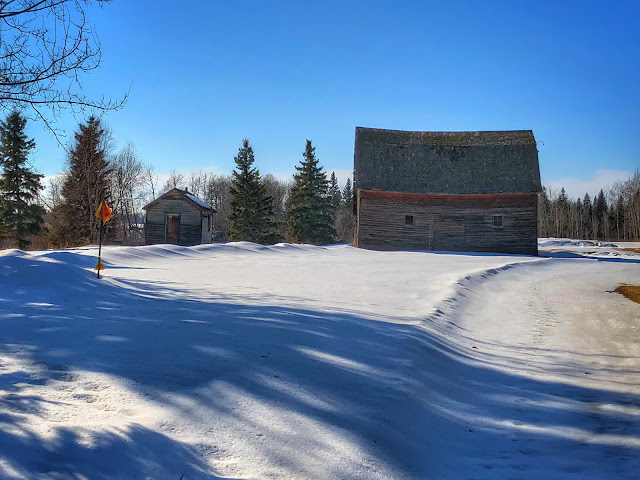 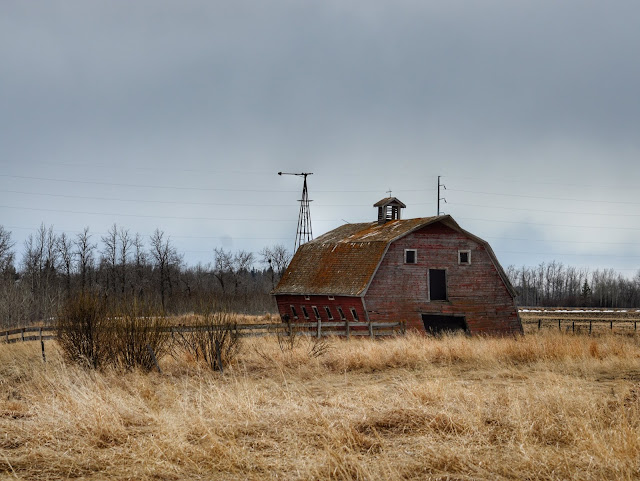 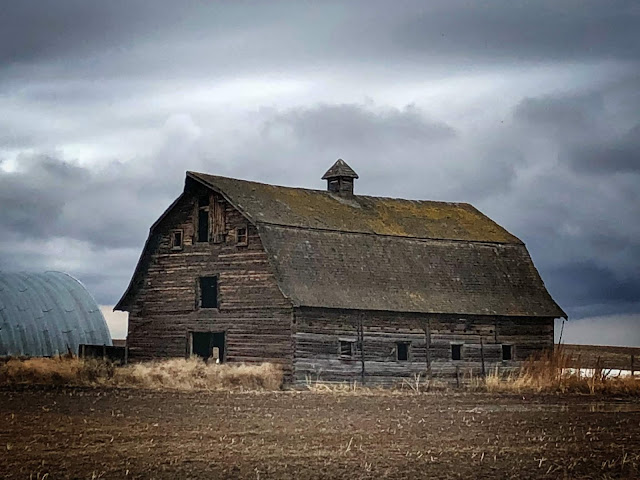 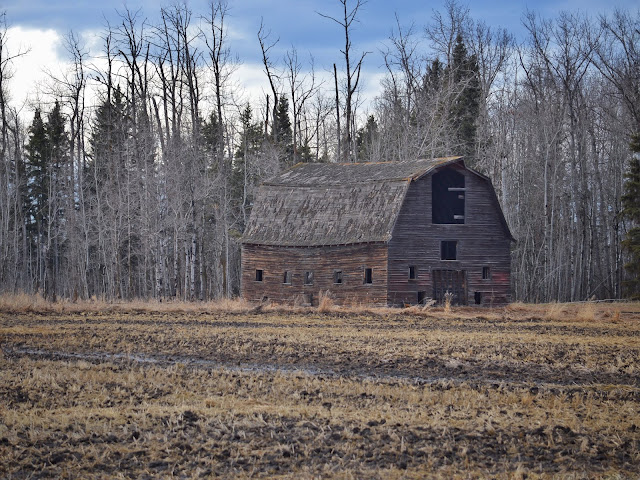 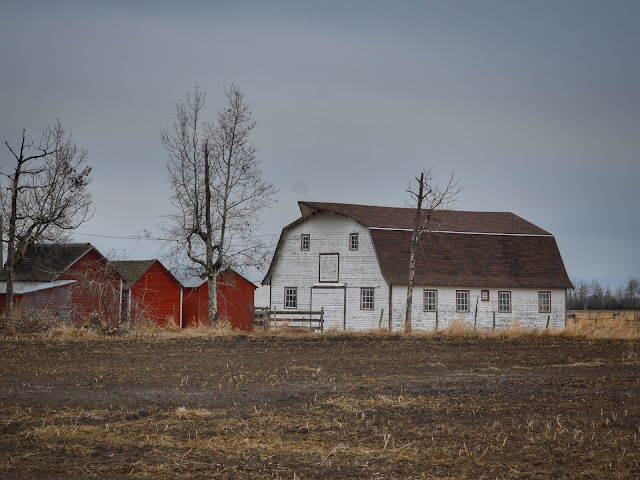 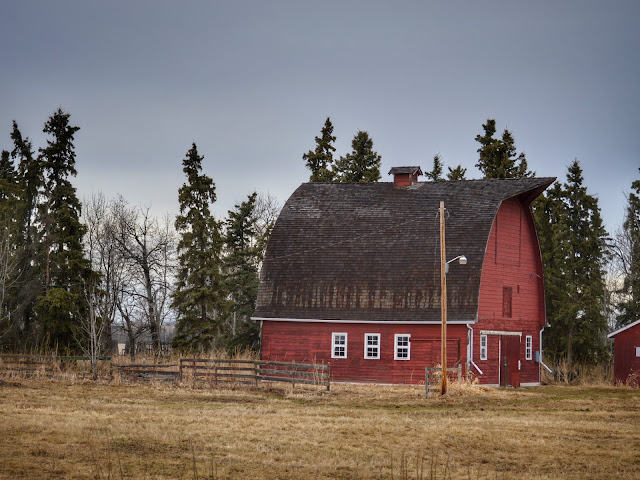 The following is a favourite barn (also pictured above), it is easy to spot beside a major highway. I have stopped at it often. Here it is on April 21st and also a shot from last summer. I am standing in almost the same spot it appears.  If anyone else sees barn faces, this one looks happy despite it's pronounced lean. 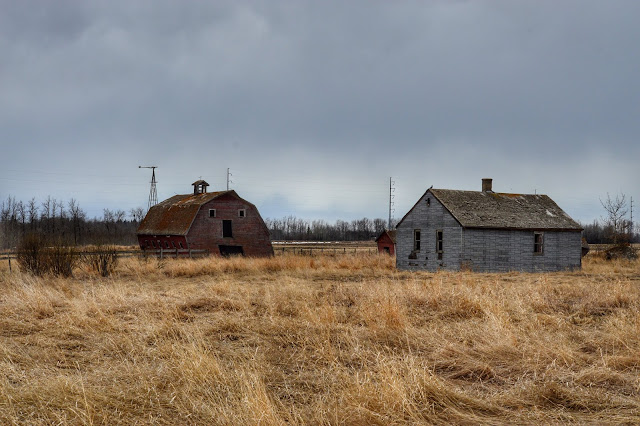 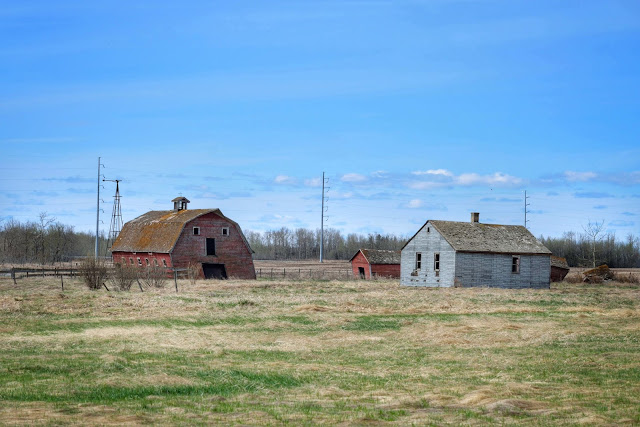 Do you have a favourite barn? I have one, but it is not pictured here.

The hamlet of Telfordville was a treat, I didn't know what to expect here but was surprised at it's charm. If you come in from the highway north, the pretty tree lined road winds down into a river valley and is pleasant change from the surrounding farmland. Keep on this road and it will eventually meet up with the same highway again to the east. It's a great little detour! We came in from the south though on a totally different road!

The first thing you see coming from the south, is an old building with a false front. Perhaps it was a garage at some point. Near this building is what appears to be an unoccupied house. There is an overgrown gate and path. There is no driveway or approach that looks used, that I could see. 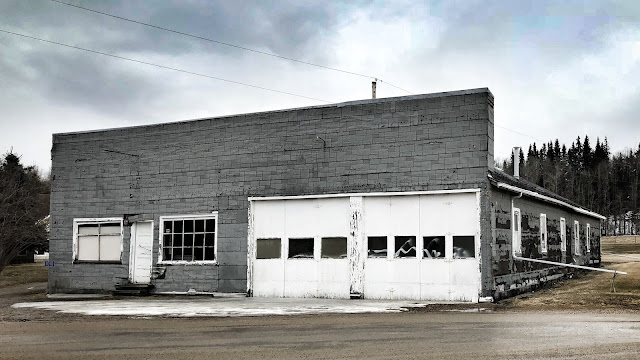 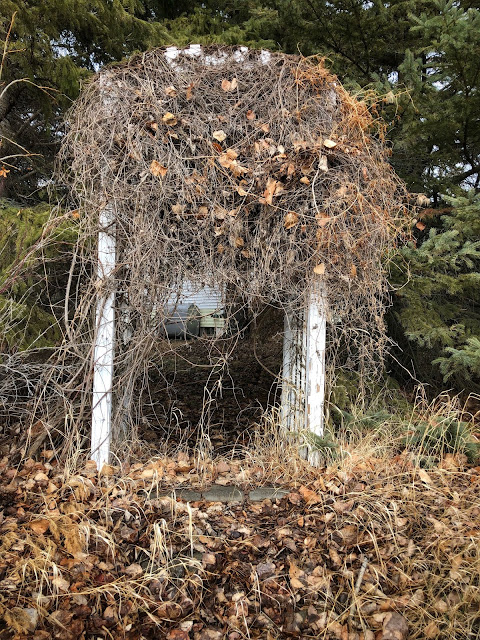 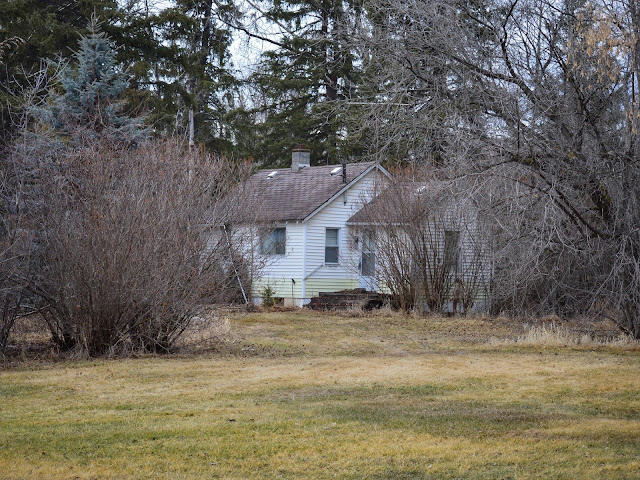 Telfordville also has a church and a community hall and about 10 km SE of here we happened to come across the former location of the Telfordville School. Not to be confused with Telford Hall, which also was a school and is also not too far away. 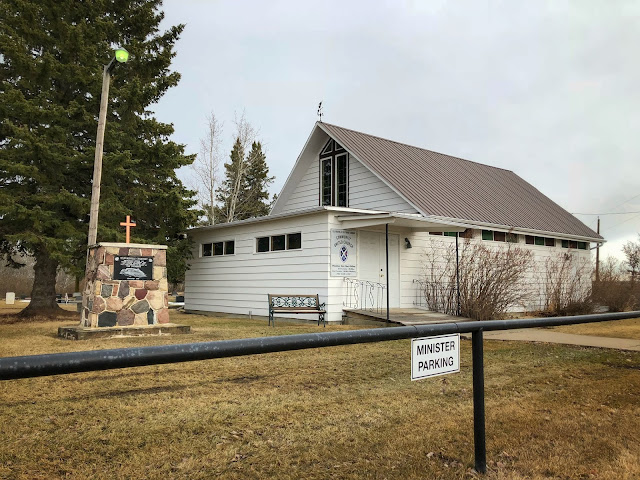 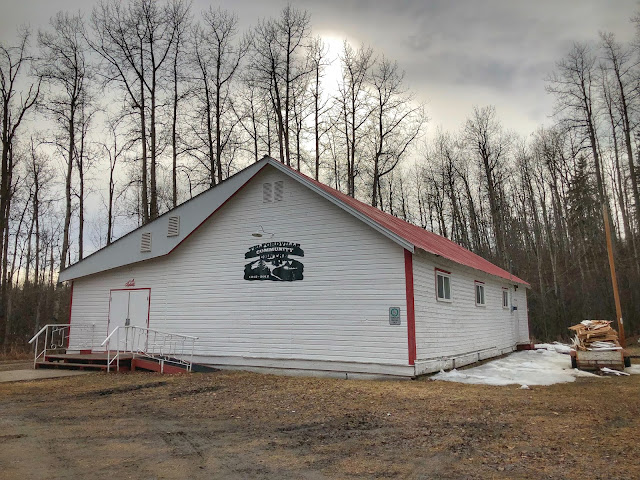 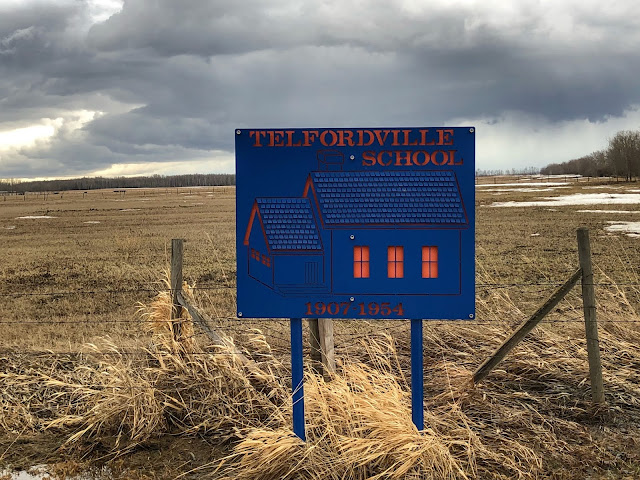 Telford Hall (formerly Telford School), Telford Lake and Telfordville all appear to have been named in honour of Robert T. Telford. He arrived in the area, that is now Leduc, in 1889 after serving with the NWMP. His land is what is now the City of Leduc. He was the first businessman and mayor of Leduc and later became an MLA serving from 1905-1915. Telfordville is 45km west of Leduc.