I took these last week. I was on a secondary highway looking for an abandoned house. I found a better house and some amazing dark stormy skies in the distance.

At one point, a rainbow appeared and it looked like we were driving right through the end of it. It was amazing. It either disappeared or we had passed it. I did not see the pot of gold.

Enjoy your weekend everyone! 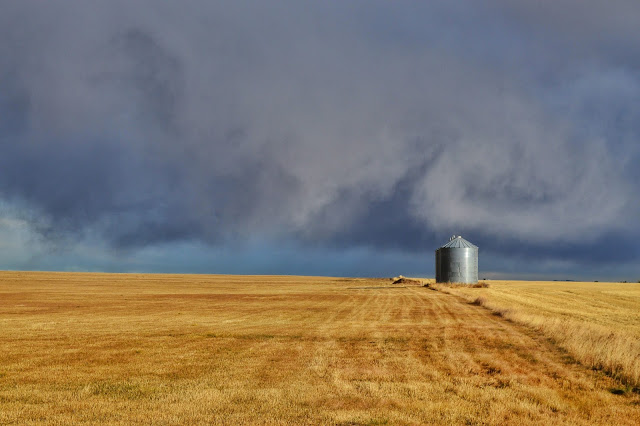 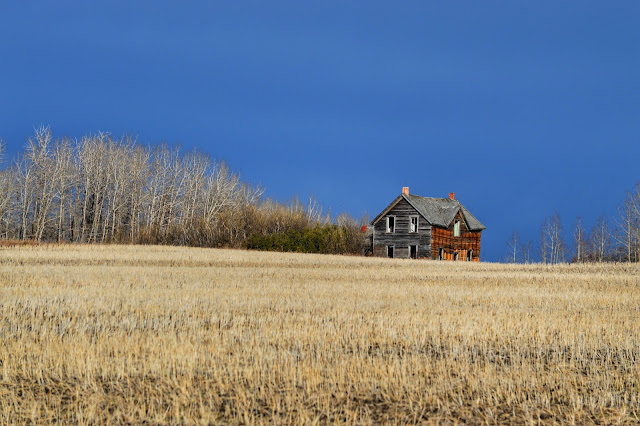 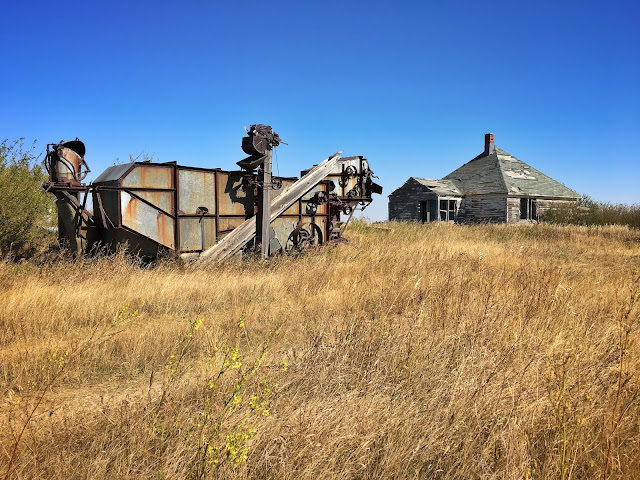 Bulwark is a true ghost town, not a living soul left there. Just a few scattered buildings, rusty cars and machinery that hint at what used to be.

I have been wanting to see Bulwark for awhile, even before I knew the significance it held to some close friends of mine. Seeing it recently was even more special once I found out that their grandparents (Lundy) homesteaded near Bulwark.

Settlers has arrived in the area in the early 1900's. However, Bulwark officially formed as a village when the railway came north from Coronation in 1914. Bulwark became a busy hub in the middle of a large grain district. It was home to 5 grain elevators, 3 lumber yards, 2 general stores, a hardware store, garage, post office, 2 churches (United and Catholic), a school, bank, butcher, drug store, livery, dance hall, pool hall, blacksmith and even a real estate office.

The first post office, originally called Lindsville, operated from 1908-1916. The name was changed to Bulwark, and it as operated as such from 1916-1965. It is speculated that due to Bulwark being in the proximity of royal themed settlements such as Coronation, Consort, and Throne, that Bulwark was named according to that theme. Perhaps a less obvious reference than the aforementioned communities. I am still not exactly sure how a bulwark fits in here, but Bulwark it is!

In the 1960's the railway closed the line that passed Bulwark. The population was already on the decline and the was the proverbial nail in the coffin. Businesses began to close permanently and the people moved away. The last store to close was the Ogilvie General Merchant.

I just love this photo below! It was shown to me by Marvin Dolling through a photo group I am part of online. His Uncle owned the general store, from which this photo was taken. He thinks it was called the Bulwark General Store and that it also housed the post office. The building seen in the picture is the Atlas Garage and in the background you can see the 5 prairie skyscrapers.


Our first stop was Bulwark Cemetery, to pay our respects to the Lundy family buried there. I always take a moment of reflection when visiting pioneer cemeteries. 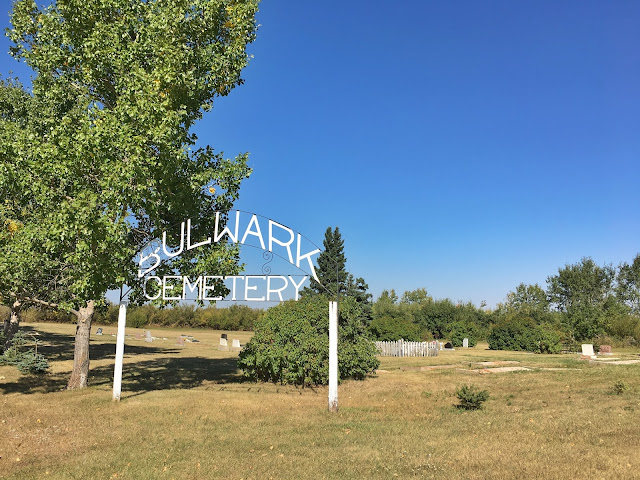 Down the road from the cemetery is the old townsite. You can see how Google maps shows streets where there is only farmland now. We explored Kitchener Street from Roberts Ave. to Beatty Ave. French Ave. is where the grain elevators once stood, you can still see part of an old grain elevator annex along the long pulled up rail line. 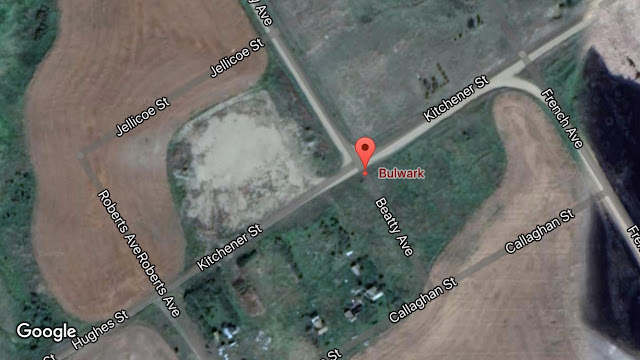 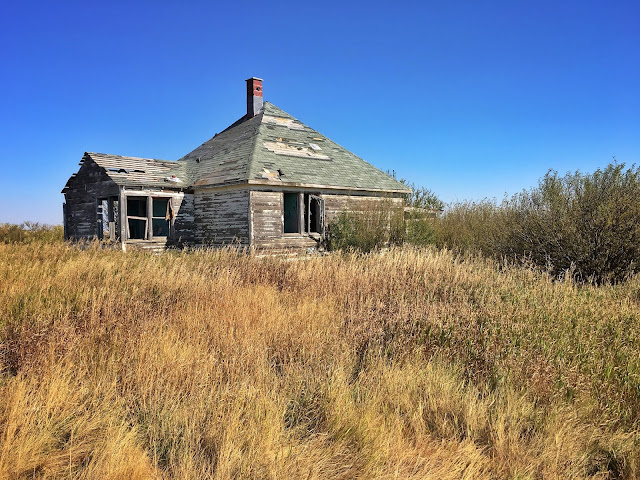 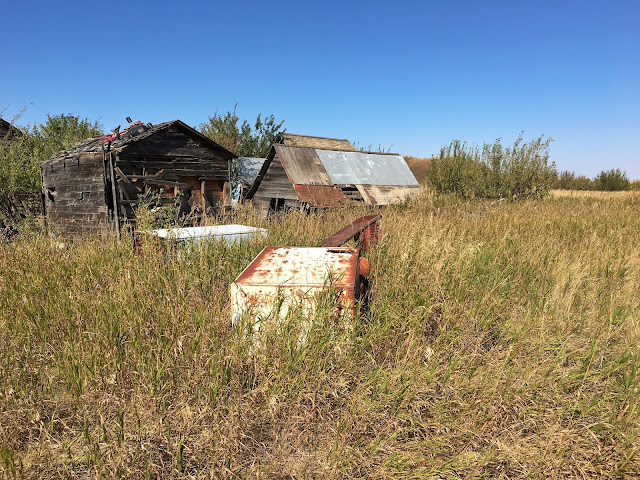 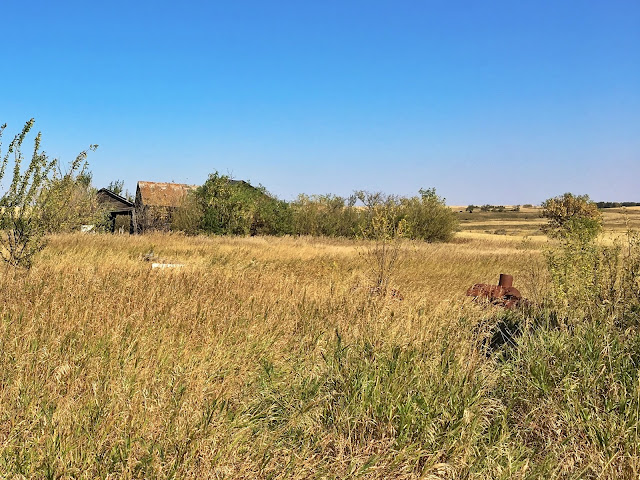 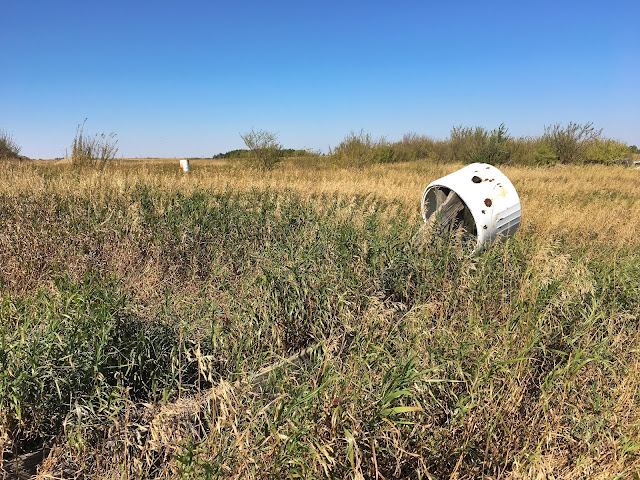 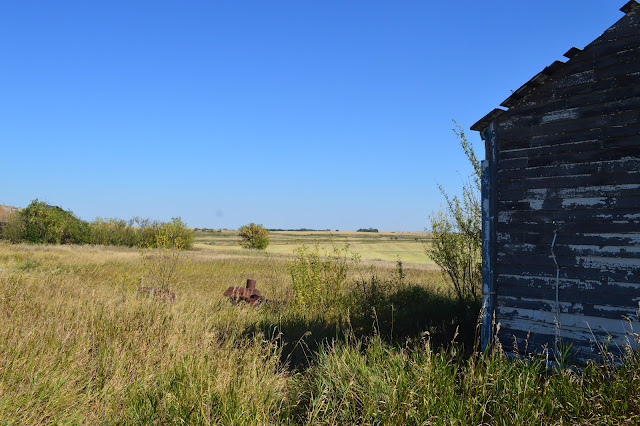 Interestingly, the old Pioneer elevator from Bulwark ended up on a farm belonging to another Lundy family member, thus saving it from demolition. Looking north and a bit west from the Lundy elevator you can see a 2nd elevator, also originally from Bulwark and still being used on another farm. The other 3 elevators that used to be in Bulwark are long gone.

Even though the Lundy elevator is only 1 of the original 5 and not in it's original location, I can get a sense of the view the farmers must have had as they hauled grain to the elevators. Threshing crews worked long hard days and the farmers at that time hauled even in the winter with teams of horses pulling several wagons. This province was built on the hard work of these people and you can feel that when visiting a place like Bulwark.

As always, if anyone has stories or photos of Bulwark, I would love to see/hear them!

Thanks to Cindy and Callee Lundy for letting me tag along. The next post will be about the old homestead! 💖

References: Pioneering with a Piece of Chalk; In the Beginning: A History of Coronation, Throne, Federal and Fleet Districts; Place Names of Alberta Vol. III Central Alberta
Photos taken on Sept 4, 2017.

You never know what you might see, or in this case not see, when driving the back roads. If it wasn't for the sign I would have driven right by this place.

It looks abandoned but I can't be sure, the rock out front (by the ladder) says 'Home of Ken Miller'.

I have heard that trying to get permits in Red Beer County can be difficult, and Inspector Bud Weiser can be a real hard ass.

Next time you're out, be on the look out for invisible houses, they could be anywhere!

The Soundtrack of my Life 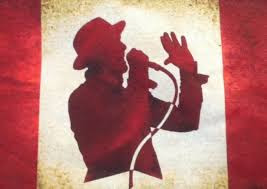 You may or may not be familiar with a Canadian band called the Tragically Hip. Last year their lead singer, Gord Downie, announced he had terminal brain cancer. They embarked on one last tour and I think a good portion of the country watched their final live concert on the CBC (of course).

Gord Downie passed away this morning and even though something is expected, it does not make it any less sad. The Hip has always been a part of my playlist since Road Apples came out in 1991. There are songs that can immediately take me back to certain times in my life and that got me thinking about the soundtrack of my life. The Hip would definitely be on it. Also, if you pay attention to the lyrics there are bits and pieces of Canadian history and other truly Canadian references. He was a poet.

What would be on your soundtrack? 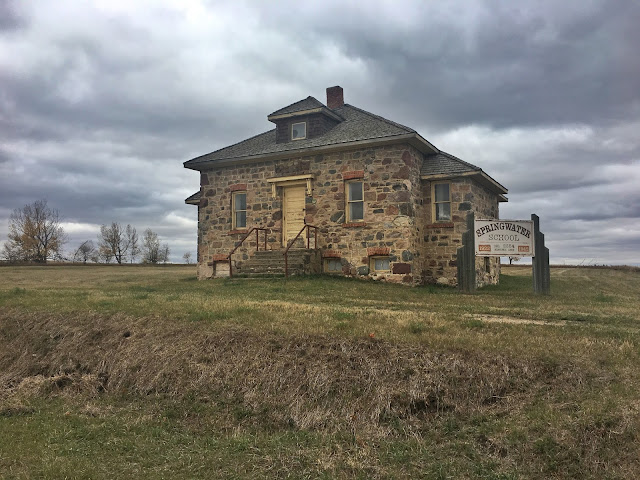 It has been a few days since my last post...but I hope it was worth the wait. I give you Springwater School and it's a beaut!

There isn't many stone buildings around, so it is always exciting to see one. Even more rare are stone one room schoolhouses. I found myself in the area of one such school recently. This wasn't a random find and I can now cross it off my ever growing list of 'must see' places.

The Springwater area, which is about 28 kms NW of Delia, opened for settlement around 1910. Like many places in Alberta, it was due to the coming of the railroad. The need for a school in the area was soon realized and the Springwater District was formed. It was't until 1922 that the stone school was completed thanks to a hired stonemason and volunteers who helped reduce costs by hauling the building materials themselves. There appears to have been a temporary school here before the stone school was completed that was destroyed just prior to 1922.

This lovely and unusual stone school only served as a school for 20 years but was used for many other function during those years and after, including dances, fundraisers, and other social events. This school also has a stage that was used for travelling entertainers, student concerts and fairs. I don't recall seeing the inside of another school that had a stage. Just image the Christmas concerts and happy times that stage has seen! 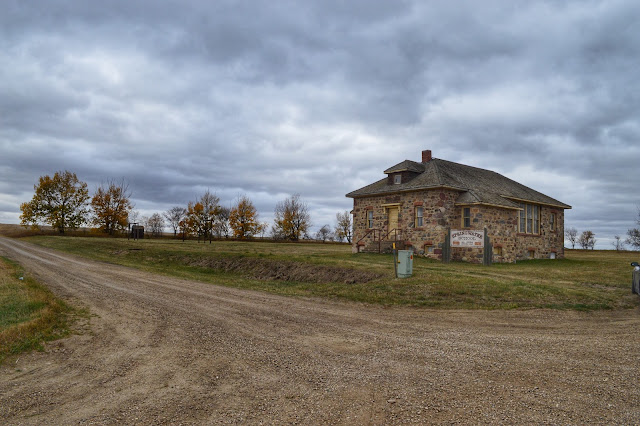 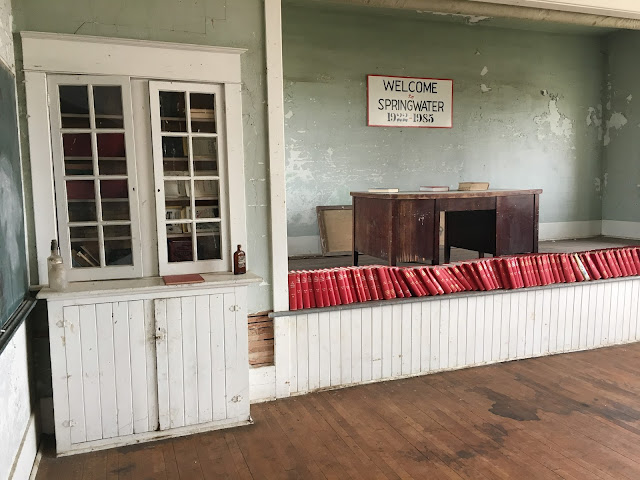 After it ceased being used as a school, it became a community centre. It hosted bridal showers, weddings as well as card games in the basement. You'll see photos of the basement, I can't imagine people hanging out down there. Definitely a man cave vibe, emphasis on 'cave'. 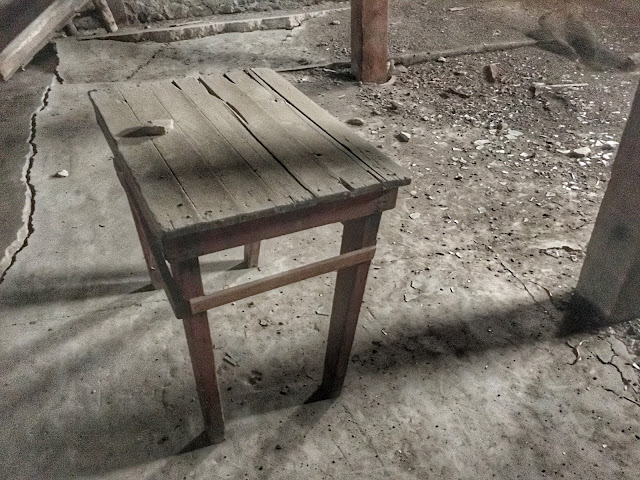 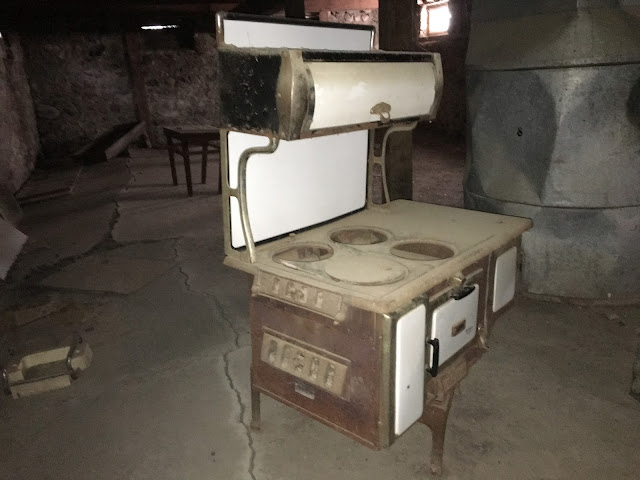 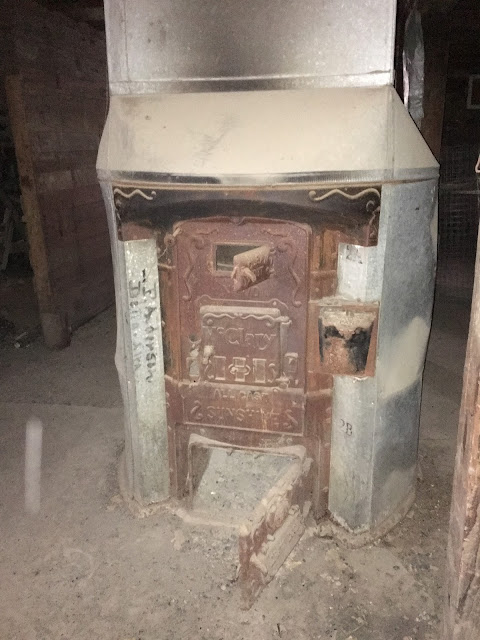 The school received a new roof in 1980, and in 1987 it became a Designated Historic Building in Alberta. The Delia Historical Society now maintains the school. 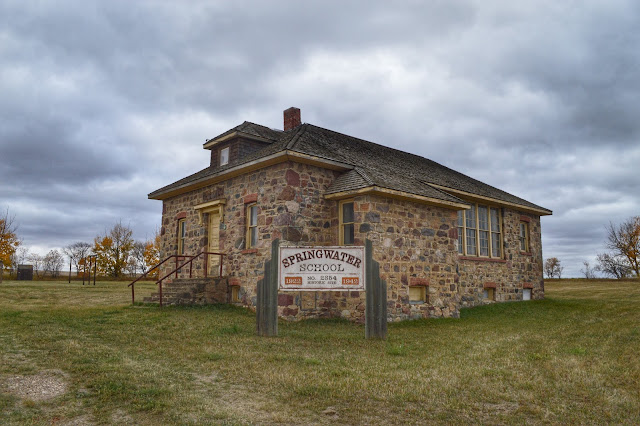 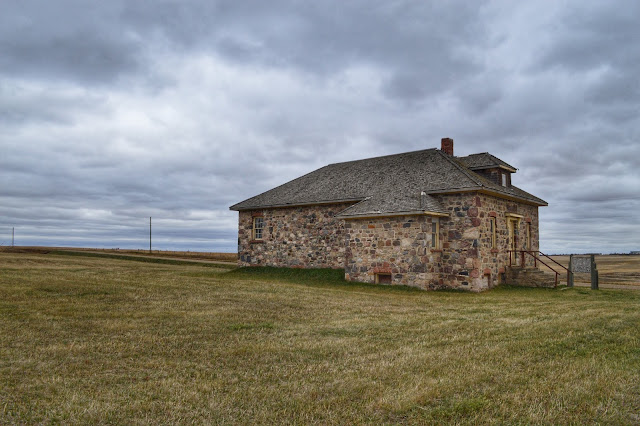 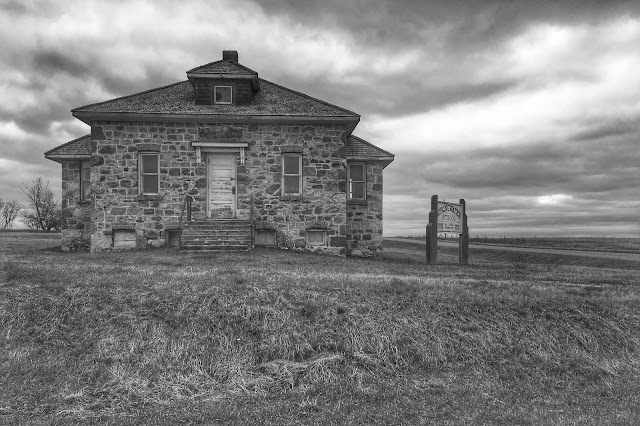 Sign the guest book and the chalk board if you stop by, see if you can spot our names on the board. It is definitely worth a visit if you are in the area. 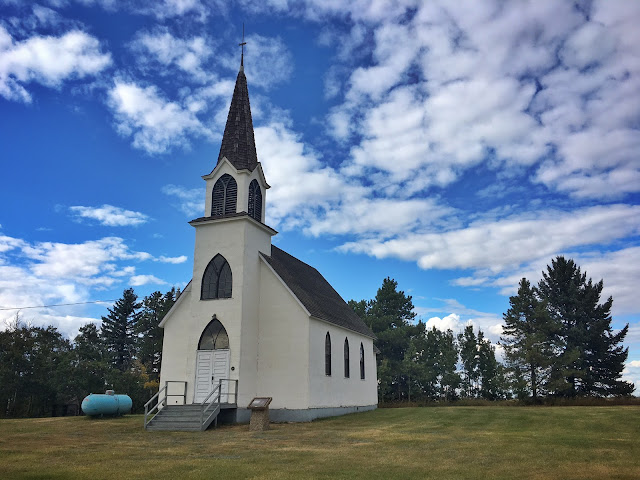 On my last trip to Lloydminster, I stopped at several churches along the way. This church is right beside the highway, east of Camrose, AB. You can't miss it. It was one of 4 churches I stopped at that day.

After holding services in various homes, 5 families formed a congregation in 1909 and chose the name Hegre after a place in Norway. Over the next few years funds were raised and land donated. The church held it's first service in 1915, even though the interior of the church was unfinished. It was during the summer of 1916 that the interior was plastered, painted and the alter and balcony were built.

The church is no longer used for service but is used for special events. It was added to the Alberta Register of Historic Places in 1997.

Unfortunately I was not able to see inside, if this blog reaches anyone that knows this church, I would love to hear from you or see more photos. 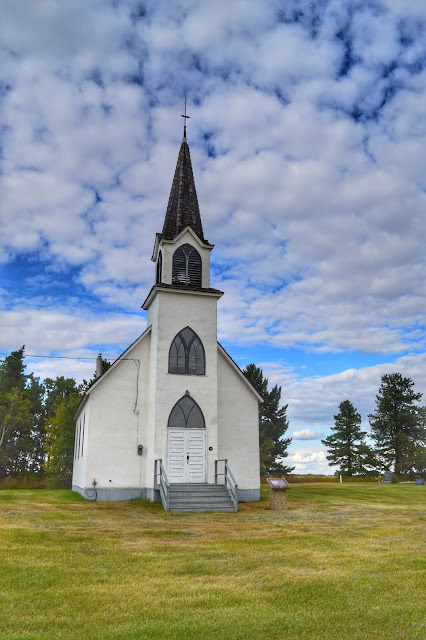 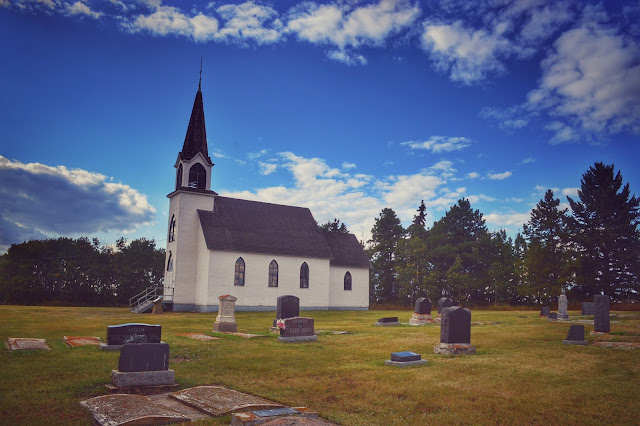 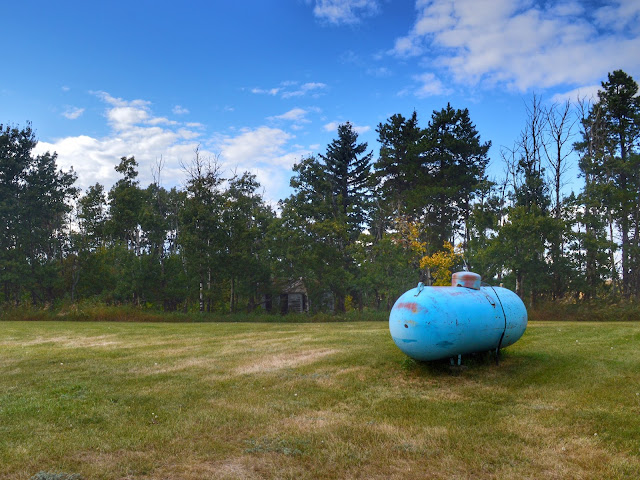 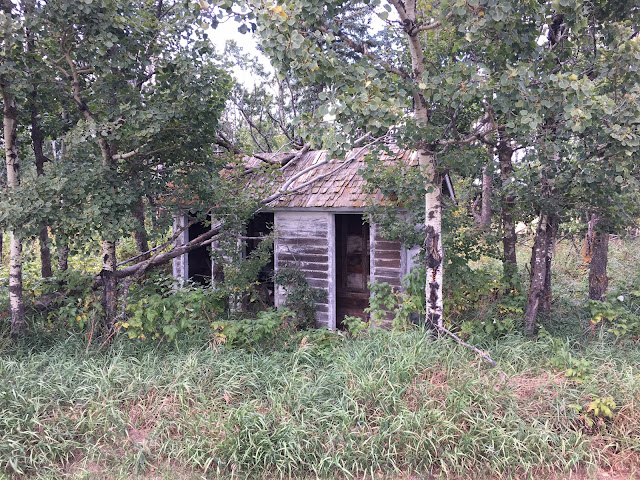 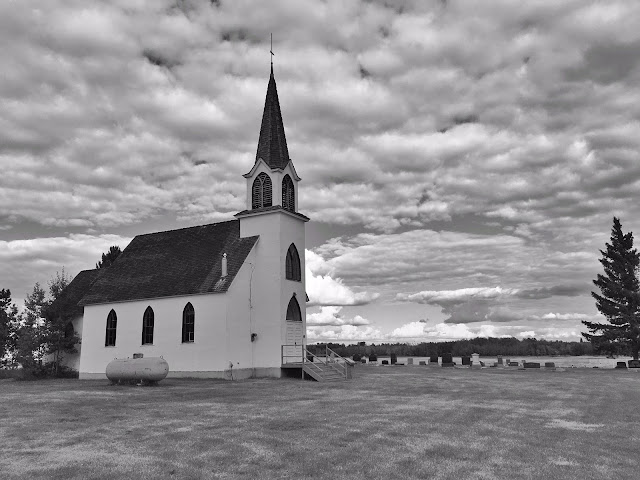 Today is Thanksgiving in Canada. We celebrated yesterday at my house. It was not originally supposed to be here but plans got 'fubared' (I will not get into details lol), so we decided to do our own turkey. Luckily both my sisters and their significant others and my nephew all made the trip up.

It was a great day and I am thankful for many things, including my family. I hope all my Canadian friends had a wonderful Thanksgiving weekend and it'll soon be Thanksgiving for my American friends!


Have a great day everyone, I have to go now and have some leftovers.
Posted by Jenn at 1:58 PM 10 comments:

As a rule I try to stop in every small town I pass (time permitting), because chances are I'll find something interesting. Maybe not a World's Largest attraction...but chances are that downtown or on 'Railway' there is an old building or 2, or more. Sometimes most of the town is old. Perfect.

One such place I recently visited was Minburn, AB. Place Names of Alberta says that a writer named Mina Burns is the towns namesake. The only thing I could find about her is she was a magazine writer from Ottawa who wrote about Western Canada. Did she visit the area? Did someone realllly admire her writing? They must have been some great articles to get a town named after you....does my blog qualify me to have anything named after me? I'd settle for a park or a lake.

Canadian Northern Railway established a station here in 1905, a post office followed in 1906 and Minburn was incorporated as a Village in 1919. In 2015 Minburn was downgraded to a hamlet. The population was 105 in 2011. To be a Village you need to have 300+ people. The trains still run by Minburn but there is no longer a station on Railway Ave.

I know there are lots of interesting things to discover in Minburn County but I only explored the townsite (hamletsite?) on this visit. On my first pass through town, I saw a couple old homes that had some character. I do believe that they were occupied though, so I didn't take photos.

Here are some things in and just outside of town. 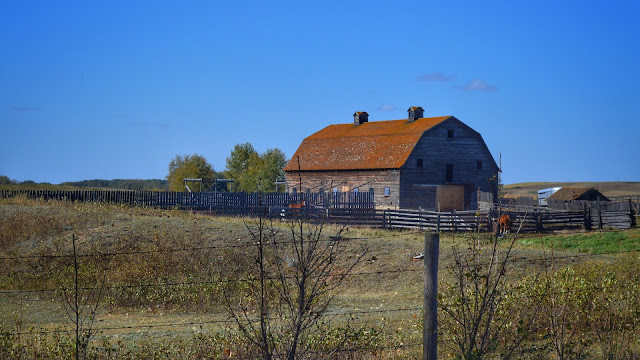 I love 'Now & Then' photos. Here is the Minburn Hotel and in 50's. I'm sure it much older but I couldn't find another photo.


Hope you enjoyed this Minburn Moment, be sure to stop by a small town today and see what you find!