I visited Rowley in September of last year and immediately fell in love with it. It's been a whole year but I am going back tomorrow. This time though I will also be meeting friends and we will be enjoying the monthly Rowley Pizza Night, put on by volunteers. The money goes towards the up keep up this virtual ghost town.  I can't wait. I am sure I will take a few photos while I am there too.

Also since I loved it so much I made a wood photo out of it, which is one of my hobbies. To see more you can check out my Facebook Page: Ingrained Images or find me on Instagram @ingrained_images 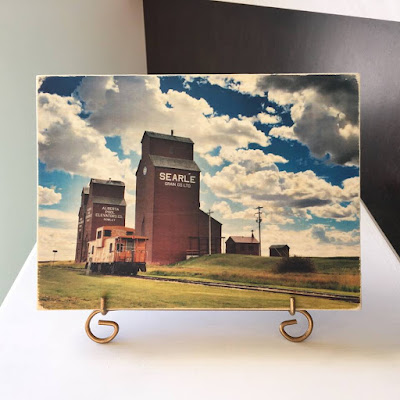 Have a great weekend everyone! Catch up with you all on Monday or Tuesday!

As teased in my previous post....here it is, St. Paul's Anglican Church in all it's glory!! This church is located in the Forest Bank area of Saskatchewan, which is north of the Village of Waseca.

I was hoping to find more info on this lovely church but the places I normally look are coming up with very little information. What I did find was that the church was completed in 1910 by volunteer labour. However the first service, a Harvest Festival, was held on September 19, 1909. I am not sure if that is correct or a typo. Regular services are still held here today. 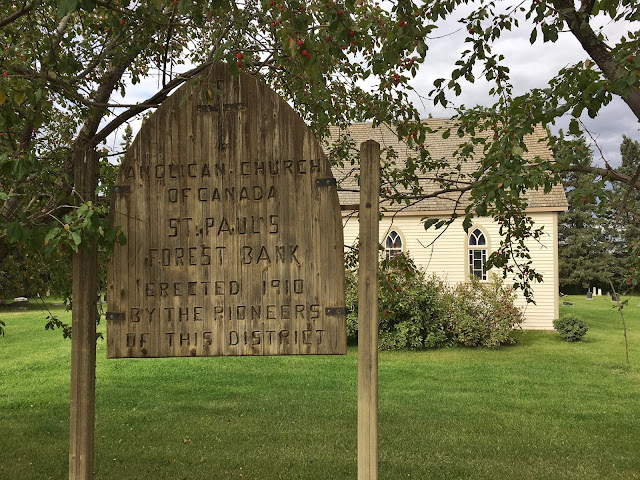 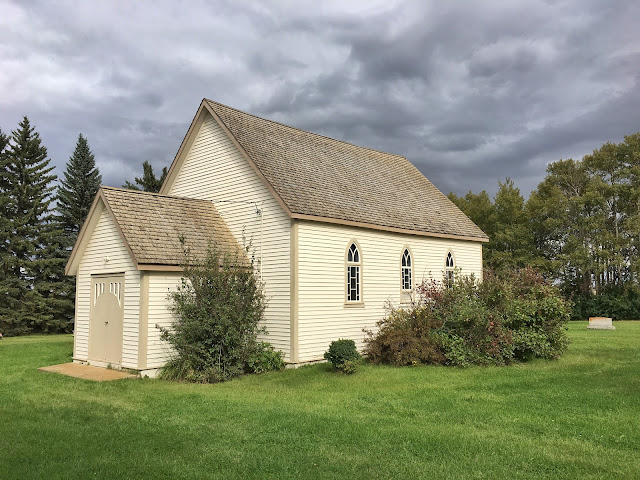 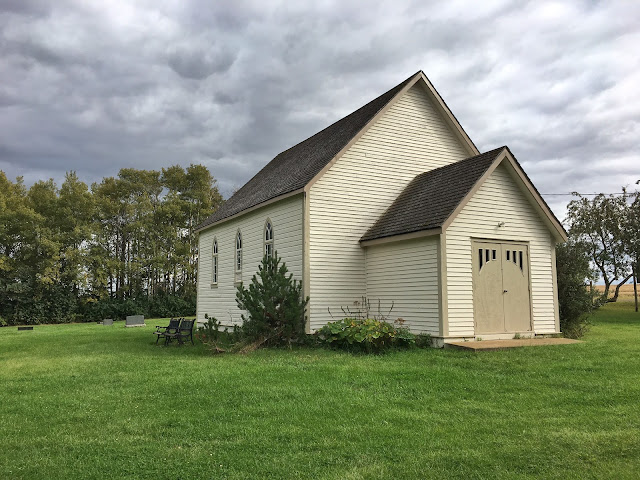 We always try the door just to see, this time the front door was unlocked but the door to the main part of the church was locked. The following photo was taken through the window. It is a well kept beautiful church. 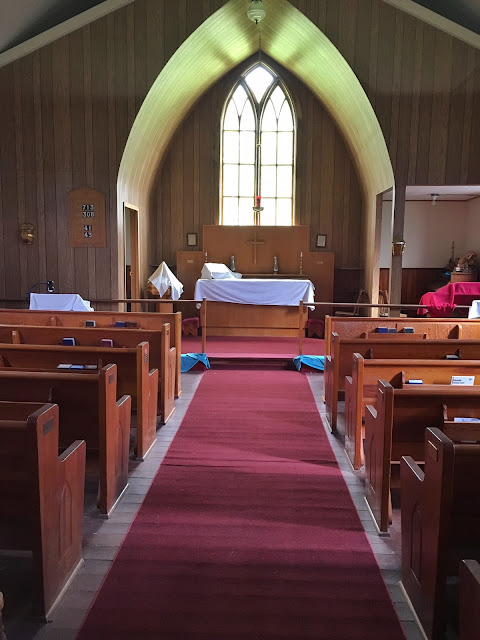 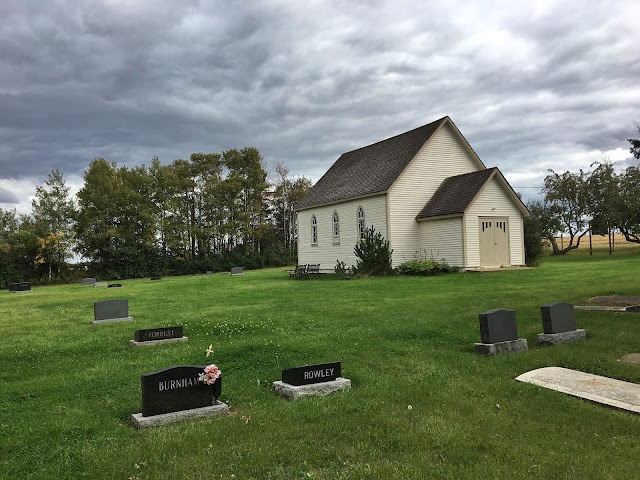 Marshall and Forest Bank: A Short Journey into Saskatchewan

Recently I was in Lloydminster, AB. I say Alberta since I was staying on the Alberta side but part of the city is also in Saskatchewan. This brings up so many questions about laws etc...but I digress....

Saskatchewan is a mostly undiscovered territory for me. I wish I had paid more attention when I was younger, since I visited southern Saskatchewan just about every year. Fast forward many years...I had the opportunity to explore a bit in the very west central portion of Sask. On my earlier visit this year, I checked out Waseca, Paynton, and Bresaylor. This time I stopped in Marshall, and a couple other sites on the backroads.

In Marshall, we saw a train approaching as we were stopped beside the grain elevator, I didn't have time to get in a better position for a cool train + elevator shot. This is my 'Train Geek' attempt.


After Marshall, it was onto a couple of planned stops. Just down the road from the church I was looking for, I found an old school that had become a community centre. It has an overgrown baseball diamond, and some rusty playground equipment. No one has played there in awhile, but that didn't stop my son from trying out the spinny, rusty, probably will need a tetanus shot thing. However, the area around the community centre was mowed.

The church and the community centre are both called Forest Bank. What does this mean kids? It means there was a pioneer community here. I could not find much info on the school, but I did confirm it was Forest Bank School #1659. While I was taking photos, my son told me the door was open, so we took a quick peek inside. As we went in, a familiar smell hit me. It's not a pleasant or unpleasant smell, just the smell of an unused place. Dust and time and forgotten things.

Once you go in you have to go up or down, the basement level was flooded, but a look from the bottom of the stairs showed some desks and other furniture. Not much to see upstairs, just left over paraphernalia from it's days as a community centre, chairs, kitchen equipment and various odds and ends. We left and made sure the door was secure. Remember, touch nothing and take only photos. 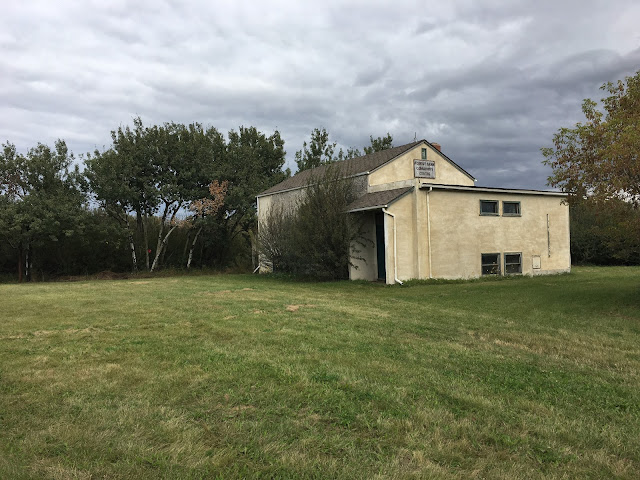 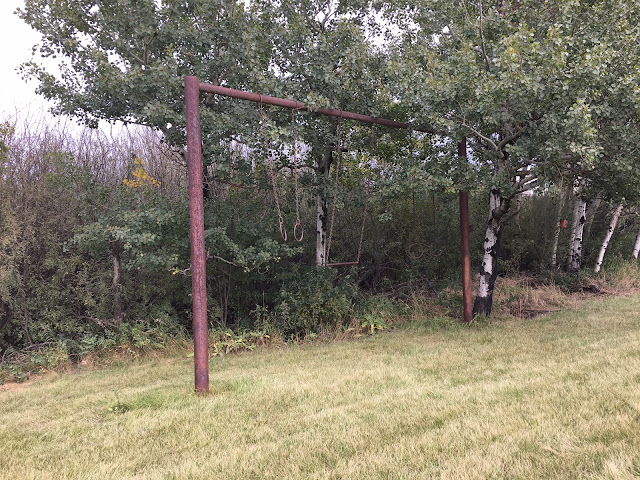 Down the road is St.Paul's Anglican Church at Forest Bank. This place is beautiful and there will be post later this week, here is a teaser: 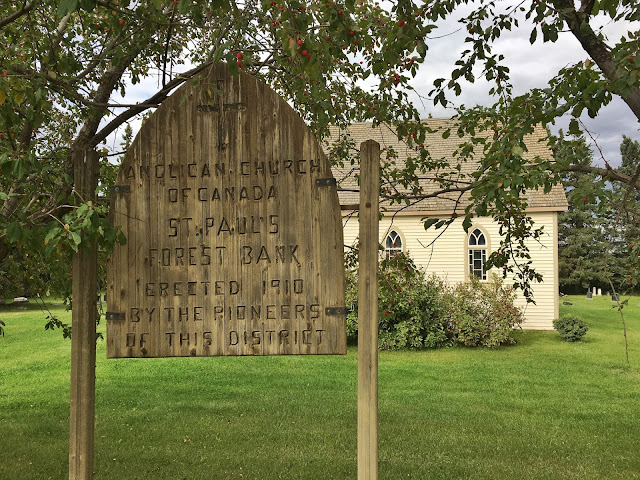 Summer is over, today is the first day of Autumn. Which means the SNOW we had yesterday actually happened in the summer. Luckily it looks like we are back to regularly scheduled fall programming with warmer temperatures and sun returning on Sunday.

Here are a few photos of abandoned homes that I took this summer. I love the character in these places and the stories they must be keeping.

I took hundreds of photos this summer in Alberta (and a few in Saskatchewan). This is a good way to remember where I was. Plus this way I don't have to post them individually and think of clever things to say each time. So onward we go!

I hope everyone has a wonderful weekend, without snow. It is much too early for snow.

Email ThisBlogThis!Share to TwitterShare to FacebookShare to Pinterest
Labels: abandoned 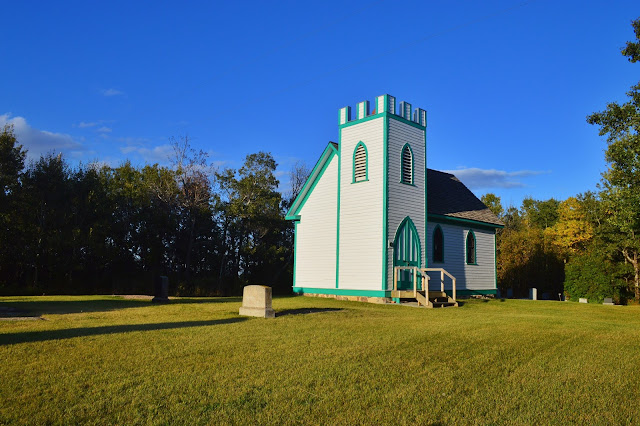 I found this gem (that colour!) while on the way to Lloydminster, AB last week. It is located SE of Mannville on a quiet road. It's a tiny site, the church and a couple dozen graves surrounded by trees, blink and you might miss it.

When the railroad came through the area in 1904, group settlement was encouraged, this particular area attracted a lot of English settlers. The area, named Stellaville, quickly established a store, post office and school. As nearby Mannville was along the rail line, it became the larger centre. Stellaville remained a tiny hamlet with a distinct English character, as can be seen in the design of St. Helen's Anglican church. The church was built in the summer of 1912, with the first service being a Thanksgiving service held in October of 1912. One wealthy member of the church, commissioned a stained glass window all the way from Italy. It was said to be the most beautiful stained glass window in the whole Edmonton Diocese. I couldn't find any sign of anything else that was part of the Stellaville community.

The last burial was in 1969 and the last services were held at St. Helen's in the Summer of 1976. The original stained glass window was moved St. Saviours Anglican Church in Vermilion in 1980. I'd like to stop by there to see it in person next time I am up that way.

I don't ever expect to find unlocked doors but the church was open and a guest book was inside, maybe because it is a Historic Site? In any case, I love being able to see inside these places. According to the guest book, it has regular visitors. Before us, the last visitor wrote a note praying for a good harvest. 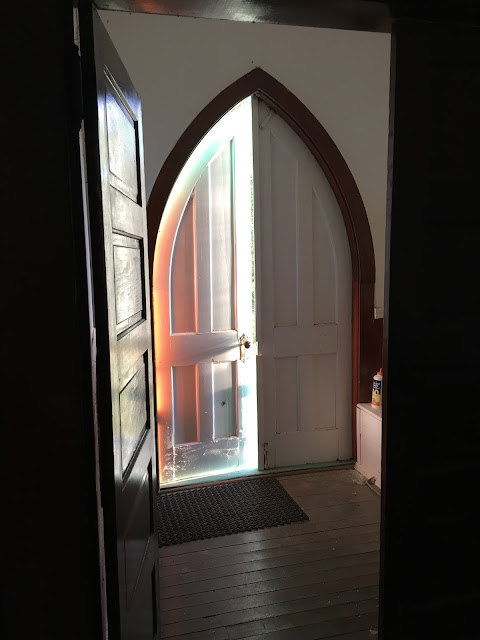 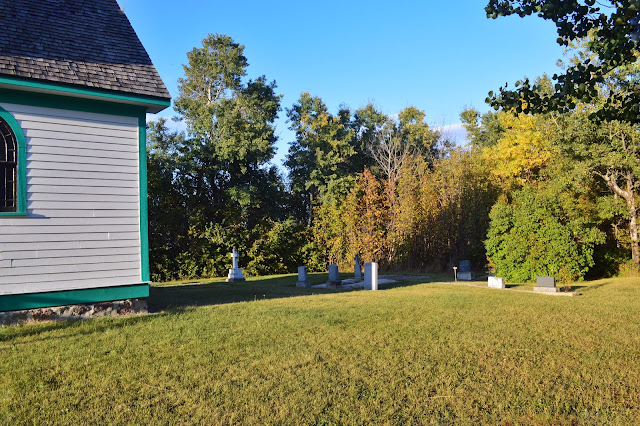 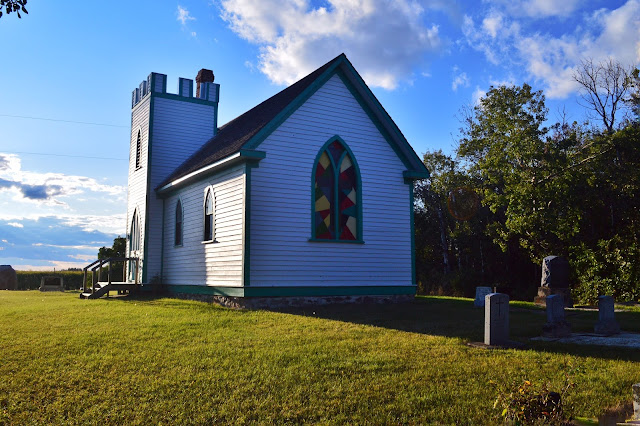 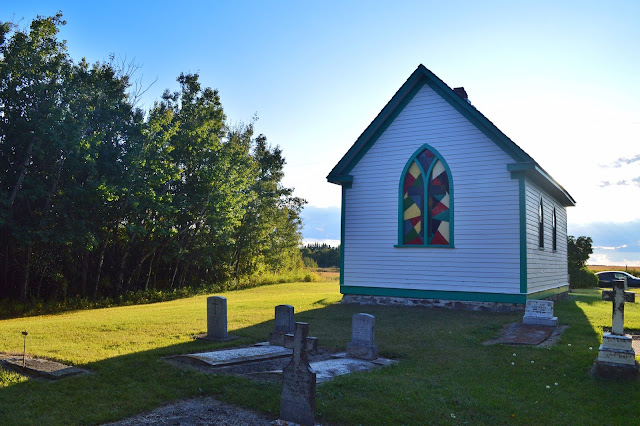 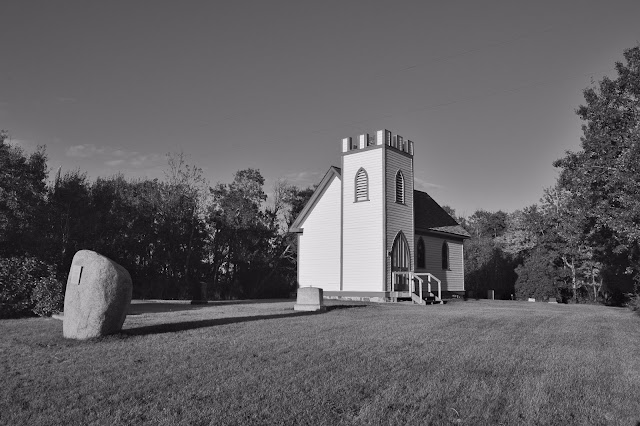 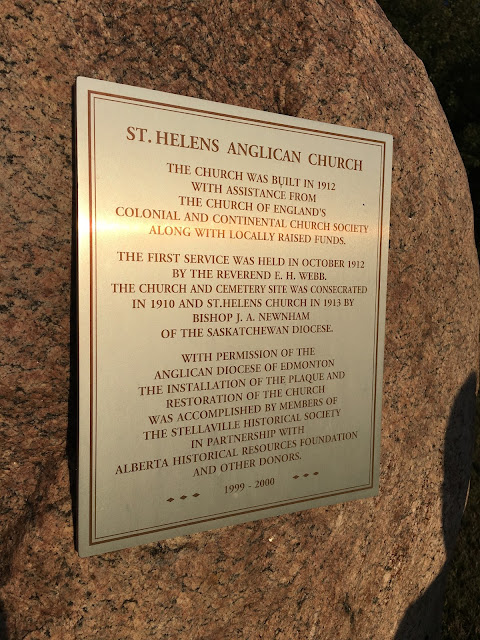 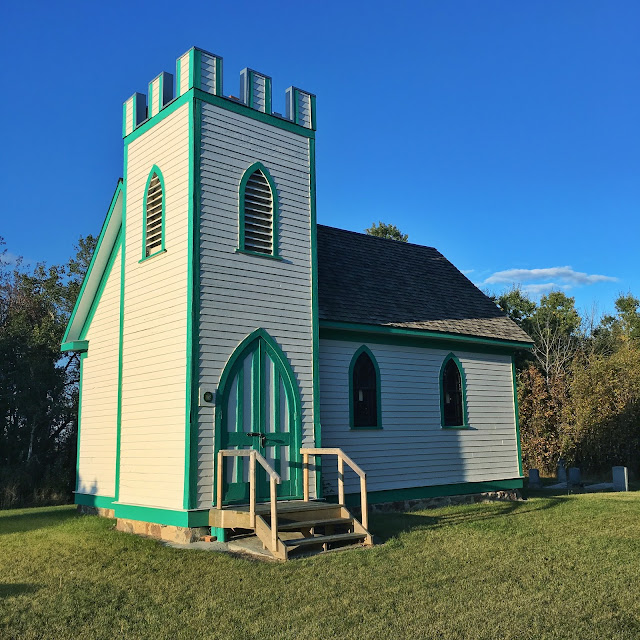 References: HeRMIS; Handwritten history inside the church and on the plaque
Posted by Jenn at 9:26 AM 12 comments:

Roadside attractions aren't everyone's cup of tea, but I like oddities, and who doesn't giggle a bit at the thought of a giant sausage. Just me and 7 year old kids? OK...moving on. Whether they are the 'Worlds Largest' or just something quirky, they are usually interesting....plus they are good places to stop and stretch on a road trip.

Here are a few I have seen on my travels. 7 year old sometimes used for scale:

Do you live near a cool roadside attraction? Or Worlds Largest something or other?
Posted by Jenn at 11:36 AM 16 comments: