I have a bunch of posts on the go, waiting for info and final touches. In the meantime, here is a grain elevator!

The Spruce Grove Elevator was built in 1958 and was in operation until 1995. It was then due to be demolished, but thankfully the Ag Society stepped in and prevented what would have been a blow to the already small number of surviving elevators in our province. This one is the last remaining wooden grain elevator on the CN line west of Edmonton

It has been restored, is fully functional and operates as a museum. The Spruce Grove and District Agricultural Heritage Society operates the Museum and Archives. The Farmers Market is also held here every Saturday from April - December.

There was no one else there when we stopped and the volunteer in the elevator office seemed surprised to have more visitors, as one family had already visited that day. Shows how many people stop and see these historical places. Many places we visit (small town museums etc.) operate on donations, I always make sure I have cash with me, it's not always a lot but at least it is something.

After looking around the elevator and taking a few photos, we noticed a trailer in the back that housed the archives. It was open and a lady named Marnie was there, as a volunteer. We had a good chat about old schools, the sad state of funding and apathy towards these old places (by individuals as well as local government). She told me of the plans for the museum, and mentioned more than once that it was something she'd not see in her lifetime. I think she was happy that we stopped to visit. I was. 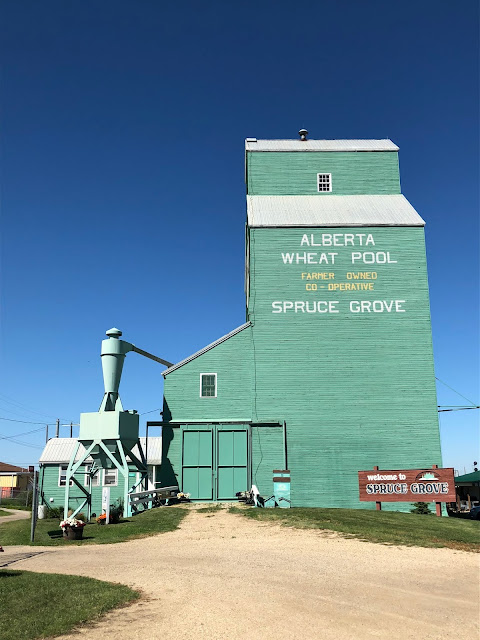 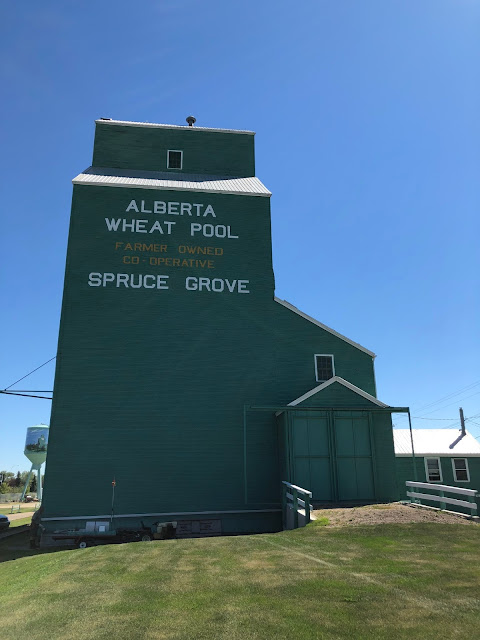 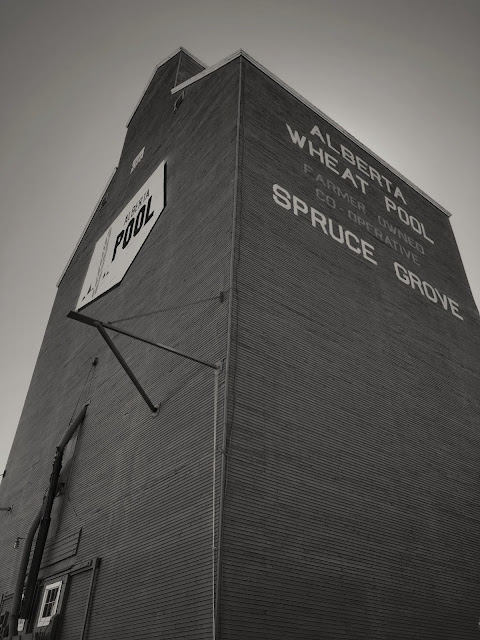 More info on this elevator here.

Back in September 2017 I did a post on Roadside Attractions.  You know them, you've seen them, you've probably taken a photo of them. They are sometimes the thing that a small town is known for. 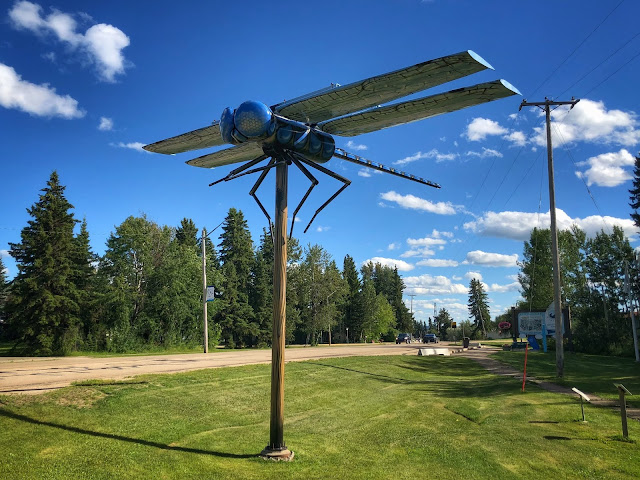 Located in Wabamun AB, it was installed in 2009. Created by Frank Phaneuf, who is a structural welder, with the intent to draw more tourists to town. It is the unofficial mascot of the village due to the annual hatching of thousands of dragonflies each June, also the same month the Dragonfly Festival is held. The 'Frankenfly' includes aircraft wings, a light standard and propane tanks. It is 30ft long and it's wings are about 30ft wide.

Are there any 'Worlds Largest' something or other near you? I now need to go find the Worlds Largest Mosquito, which does exist, in Manitoba.
Posted by Jenn at 9:18 AM 30 comments:

The Most Wonderful Time of Year

Ok, so maybe that is a bit of an exaggeration but July is a great month to find bright beautiful canola fields all over the countryside. Had I stopped at every picturesque canola field, this post would never end.

I am always looking for that special field with an old house or barn or something in it.  I never did find my canola 'field of dreams' but I know it is out there. I will likely have to wait until next July now.

Here are a few of the honourable mentions in the Canola and Barns category: 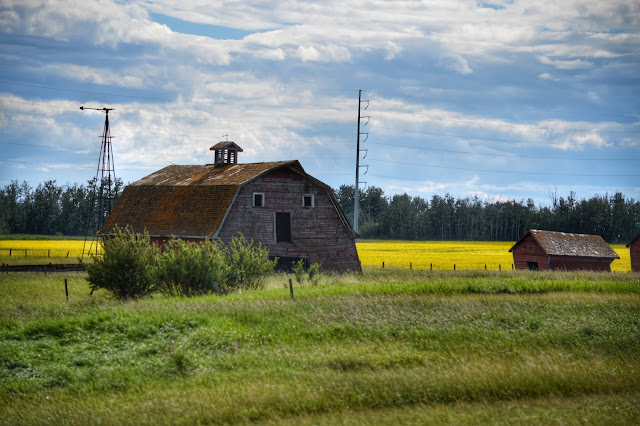 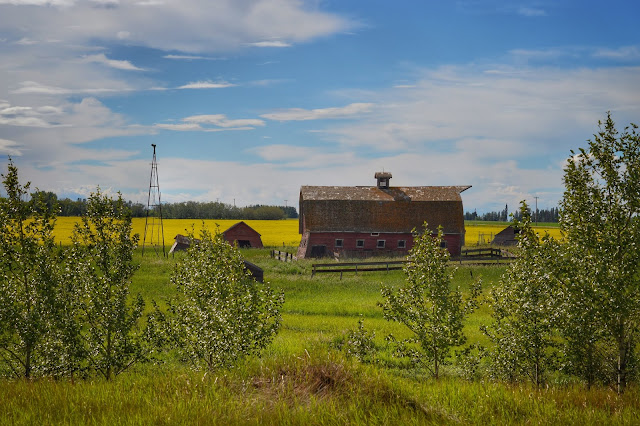 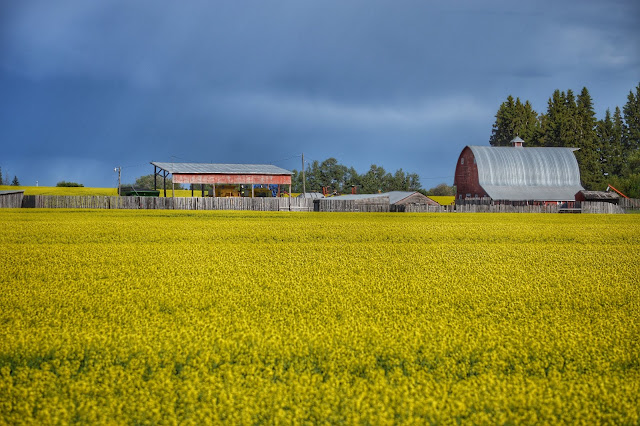 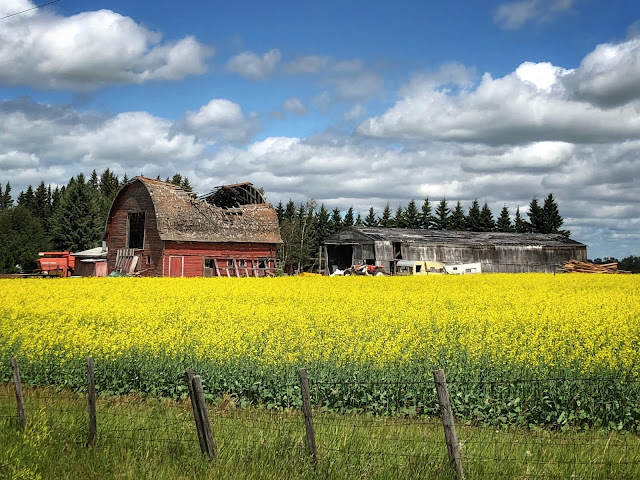 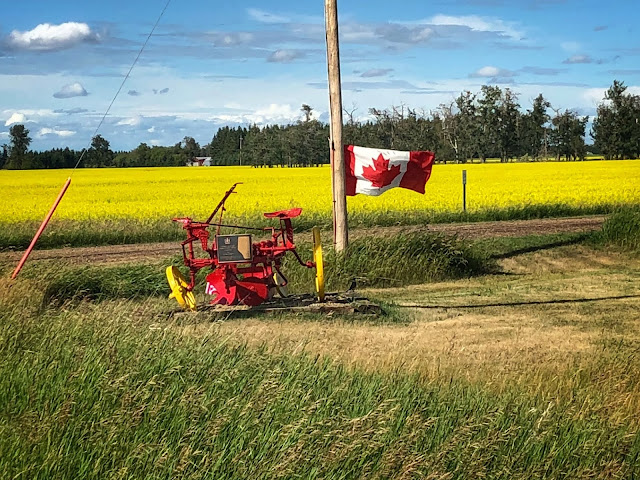 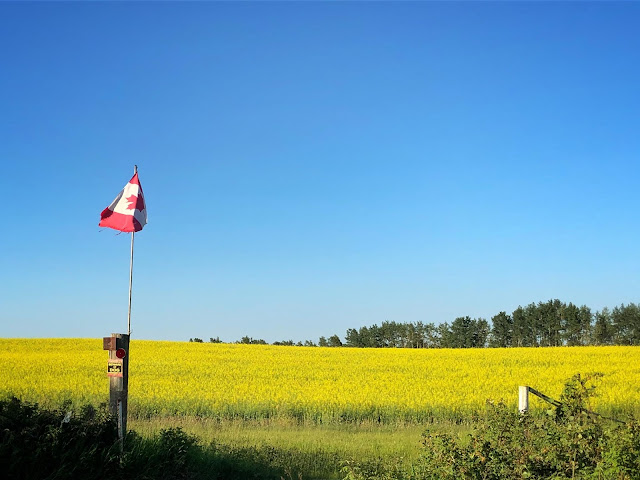 Last but not least, Canola and Skies: 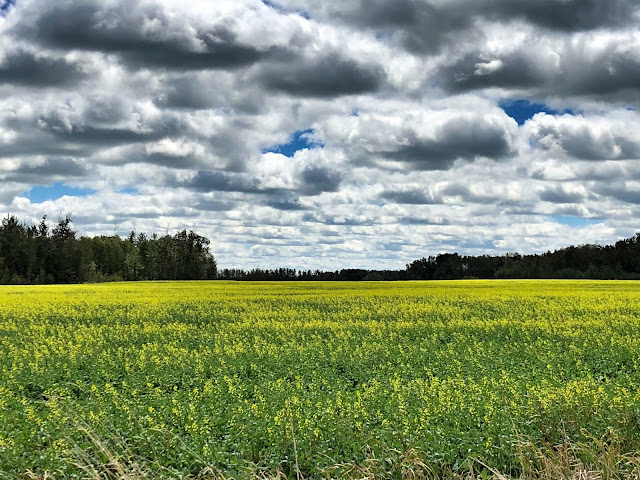 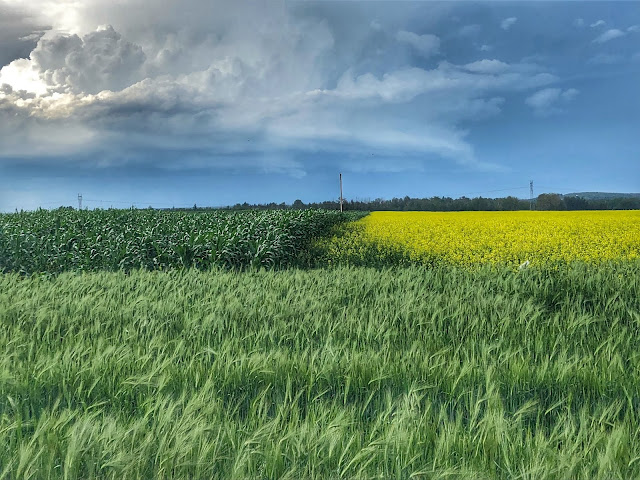 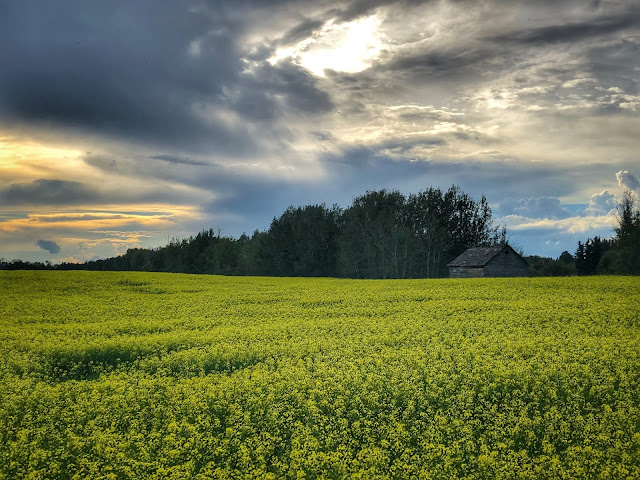 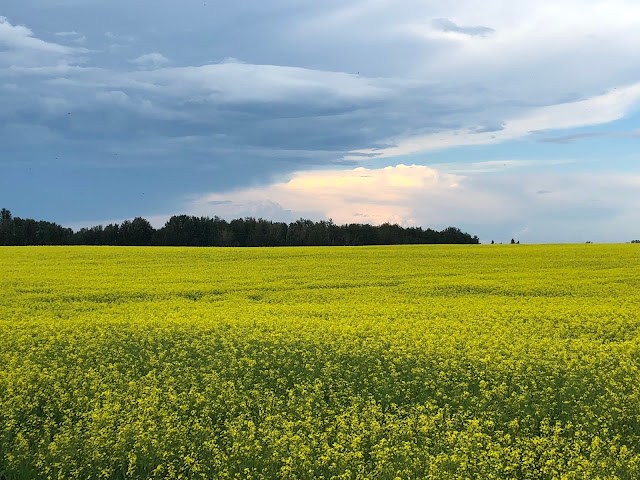 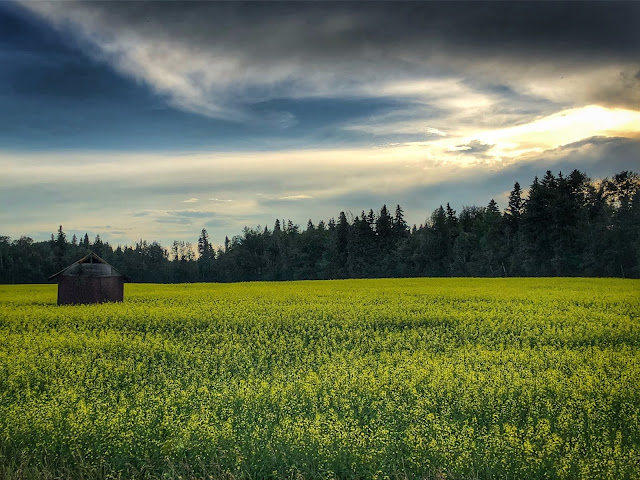 Do you have canola fields where you live? I look forward to seeing them every summer! Have a great week everyone.

Email ThisBlogThis!Share to TwitterShare to FacebookShare to Pinterest
Labels: Canola

One of things I like while out travelling is spotting a church spire in the distance. Like a moth to flame, I am drawn to that church!

From a distance is how we first saw St. Charles Borromeo Roman Catholic Church (Est. 1930) at Mearns, AB. Once we arrived at the church, we saw a house on either side of it and that appeared to be all there is left at Mearns. As we continued on our trip, we unintentionally found the St. Charles Cemetery just to the NE of the church. A sign at the location stated that the original St. Charles was located here from 1902-1930.

After looking up the church, it looks like it hold services once a month. Weekend masses rotate between it and 3 other parishes in the area. I have been to the 3 other places but only happened to take a photo of the church in Villeneuve. The other parishes are in Riviere Qui Barre and Calahoo. 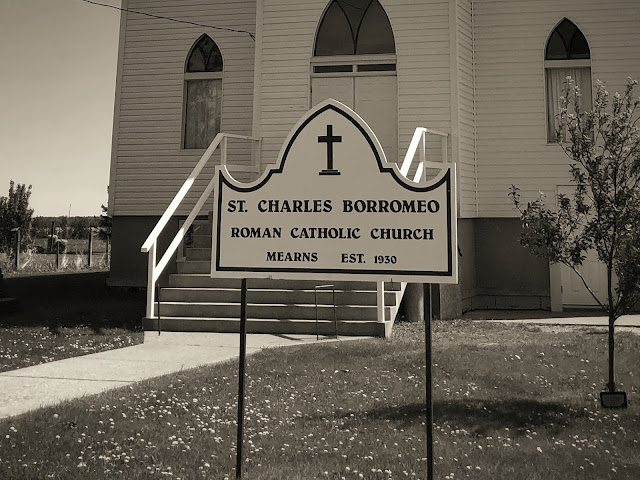 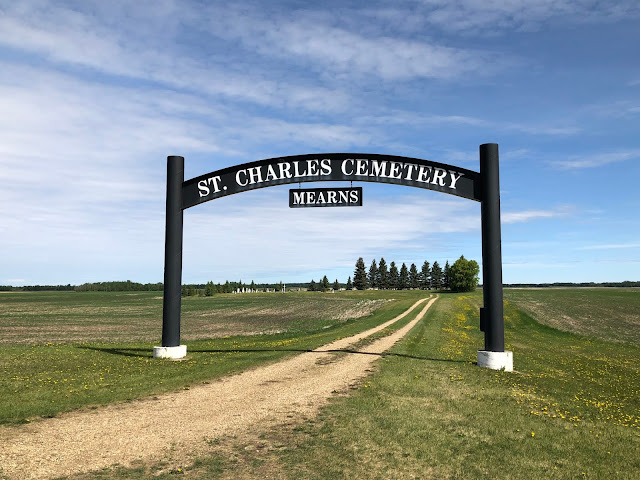 Hello! I am back! I haven't really been away, I just haven't posted in awhile.

The summer of exploring new places in Alberta is off to a good start! I had a friend recommend a couple places north of Edmonton to check out, places the kiddo would like. I hadn't planned on doing both until I realized how close they were to each other.

We started our day of fun (after coffee) at Jurassic Forest, which is (you guessed it) a dinosaur themed park. There are 2 different pathways through the forest, and it really feels like you are walking through a forest or jungle. It felt extra jungle-y that day with the humidity and heat and mosquitoes. Mosquitoes, dinos, DNA....some future civilization will find remains of great plastic robot dinos and a mosquito preserved somehow with our blood. Sounds kinda familiar, yet totally plausible.

As you walk, you will see signs identifying different plants and animals. But what about the dinosaurs? I am glad you asked.....as you pass by sensors along the pathways, animatronic dinosaurs move and roar and make other dino noises. My son enjoyed it. There was also mini golf, play area and the obligatory cafe and gift shop. 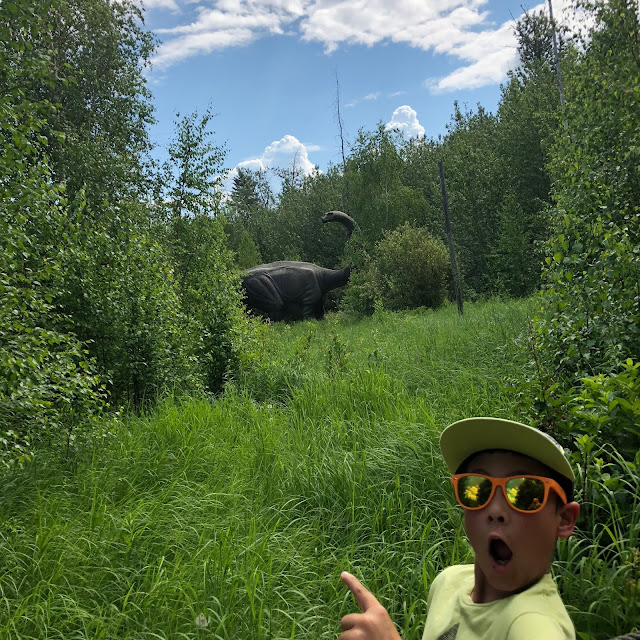 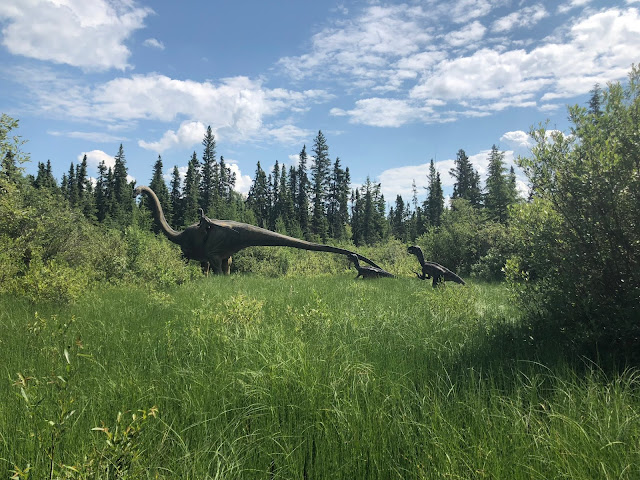 After a quick stop in Gibbons for lunch and to see their museum, which was closed, we headed to the Alberta Railway Museum.


A friend called the museum a hidden gem and I agree. Even if you aren't into trains, it was fun exploring the train cars and exhibits and even a ride on a speeder (or jigger as I have heard it called also). You can't help but appreciate the collection here!

The museum also has an old water tower, I have seen 3 of these hexagonal towers now and still find them fascinating. Coincidentally, this one happened to be from Gibbons, where we had just come from. 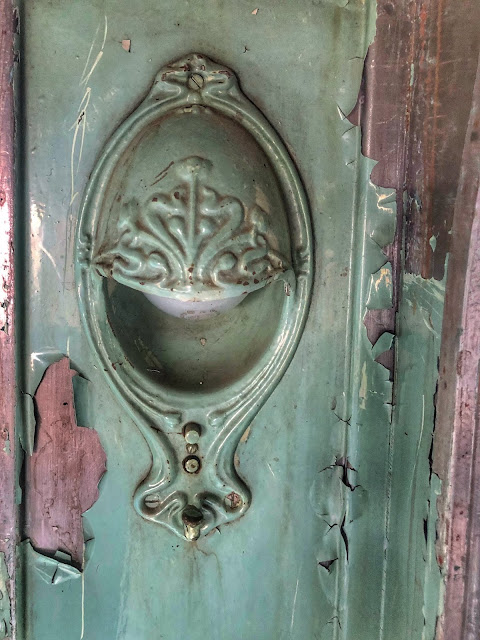 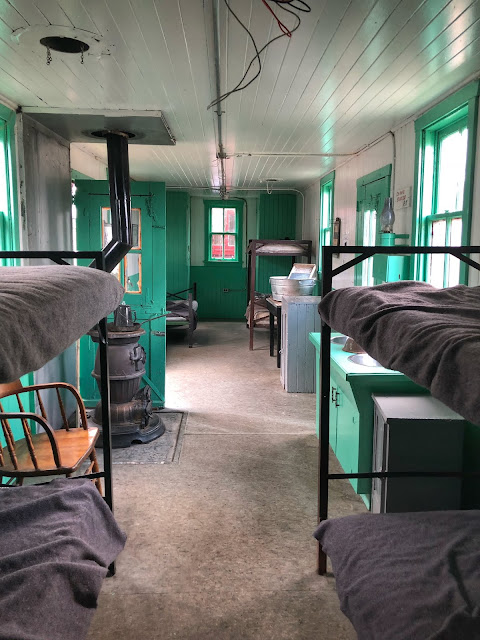 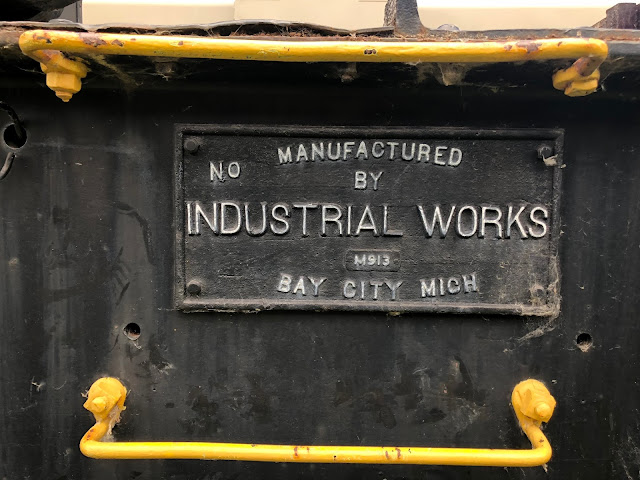 I have put links under some of the photos if you want more info. The Alberta Railway Museum website has info on each piece in their collection, I barely skimmed the surface with my few photos (was having too much fun). I didn't even take a photo of the train station, which was from St. Albert.

I think we explored every train we could and I think one we shouldn't have been in. A ladder to a door is an invitation to a kid and a kids mom. 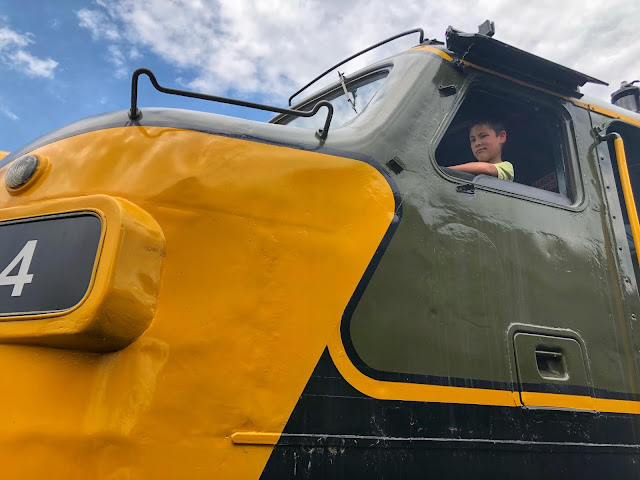 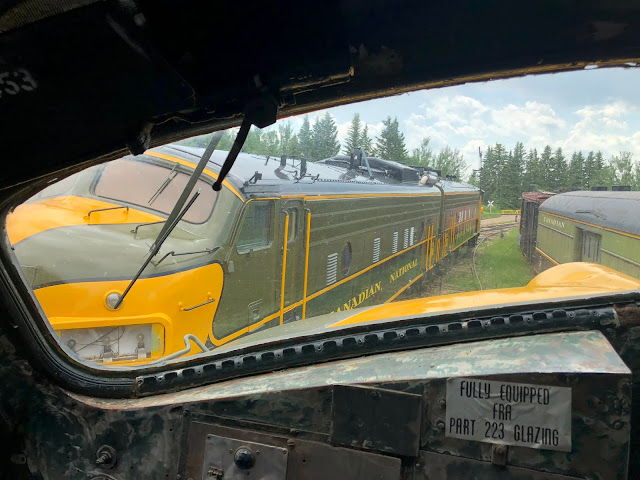