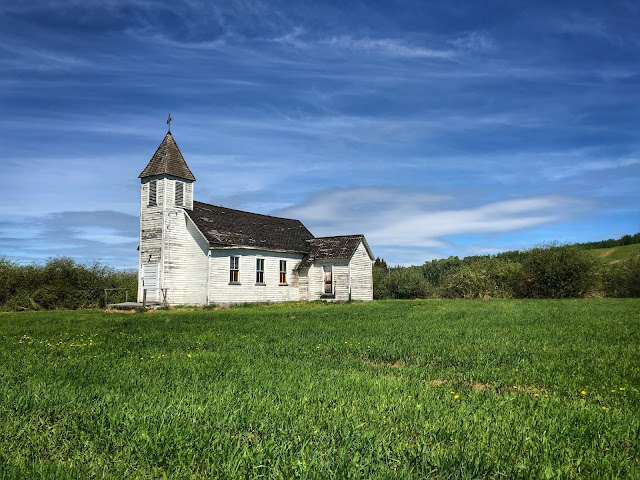 Do you ever say a name and are convinced you are pronouncing it correctly? I have always pronounced Tawatinaw as Ta-Wah-Teh-Naw. Am I right? I'm not even sure. Is it fun to say? Yes.

In case you are wondering, Tawatinaw is derived from a Cree word meaning 'river which divides the hills' or 'valley river'. It's definitely in a valley, I did not see the river. The 2016 population was 5. However it is home to a ski hill, year round resort and near the historic Athabasca Landing Trail also known as the '100 Mile Portage' built in 1876 by the Hudson's Bay Compnay as a route into the Northern Territories. It became an important route for fur traders, gold rush miners and settlers.

On the way in to the valley, I spotted an old barn and house waaaaaay out in a field seemingly with no way to get to it. We found a nearby road marked 'Dead End', and headed down it in hopes of getting a better vantage point to photograph the house. I never did find a good spot but we did happen upon the First Tawatinaw Cemetery 1918-1921 and the original location of St. Charles Church built in 1912. The dead end road kept going and it ended up not being a dead end but came out beside someones barn on their property. Oops! I made a quick getaway off their land. 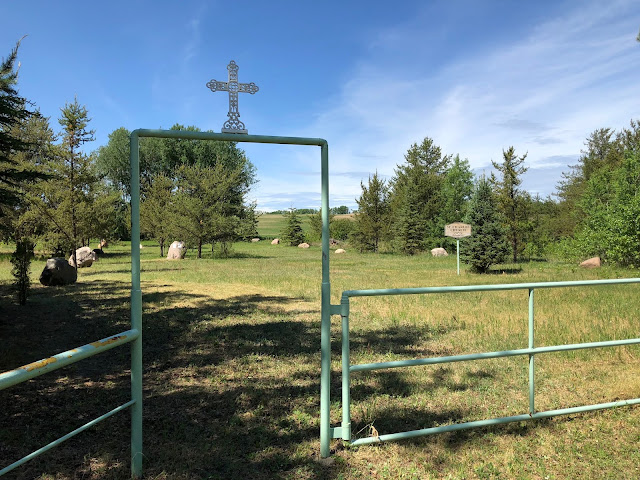 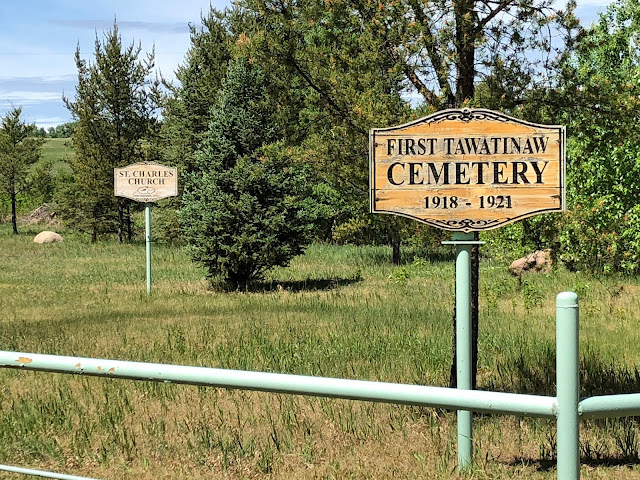 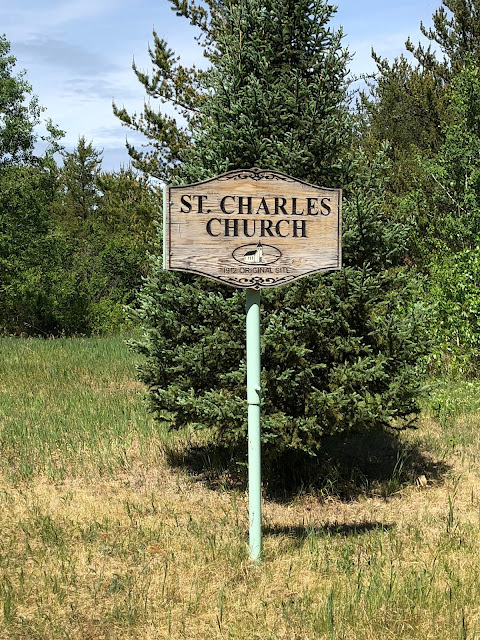 Onto the church! I have been wanting to see this church for a long time and I was not disappointed. With the almost overnight greening of the province, the church looked stunning against the hills. The guard dog I had heard rumours of came out to visit from the nearby house. He was a good boy. Just a friendly old dog looking for a pat.

There is no marker that I found but I read somewhere that St.Charles Catholic Church moved to this location in 1935 from the spot we discovered on the dead end road. The original log church built in 1912 burned down and this one was built in 1917. 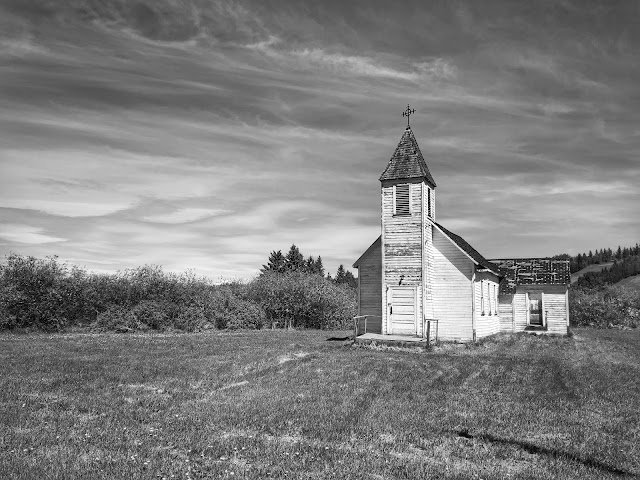 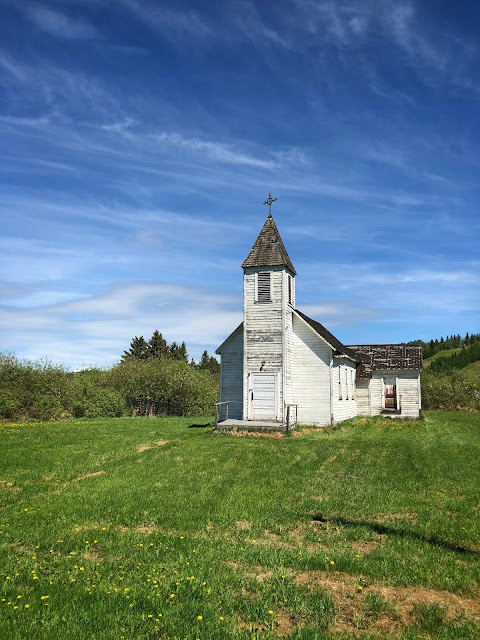 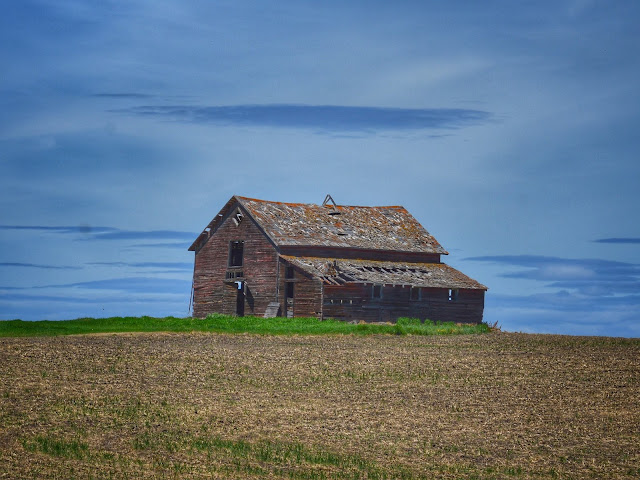 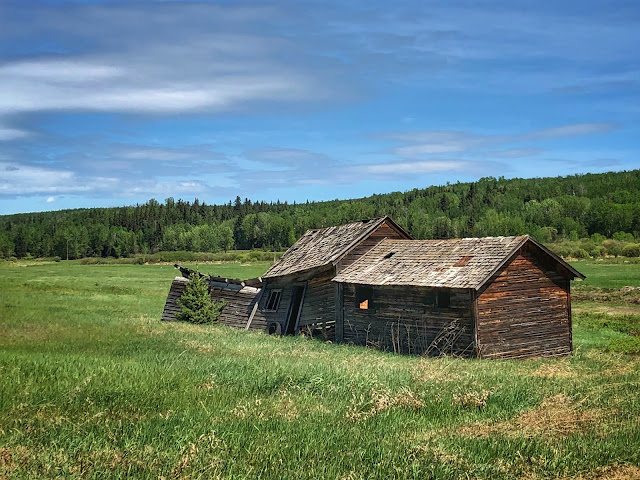 As we were leaving town, there was someone at the mail boxes. Always good to chat with a local so I asked him if he knew anything about the house in the field. He wasn't sure but he did tell me where the new cemetery was and also about the old school that used to stand on the top of the hill. After it ceased use as a school the new owners raised dogs in it. It eventually became unusable and they had a big party, invited the neighbours and lit the place up. That must have been some bonfire. He also showed me where the rail line came through and where the grain elevator once stood. No signs of any of this now. He mentioned that he was 88 years old so he has seen a lot of changes there. I hope someday, I can also say I've seen many things.

A couple photos of 'Main Street' c.1930 from the Provincial Archives: 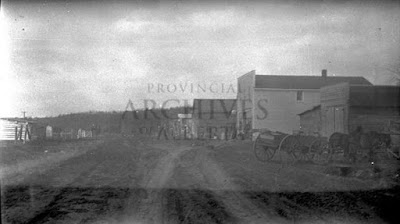 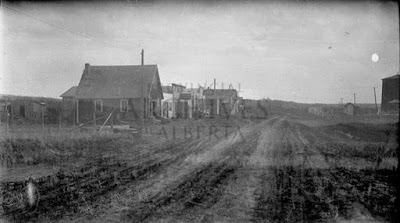