Here at West of the 5th, we are crazy about barns!  So crazy that we are dedicating a whole post to barns. Big barns, little barns, red barns, white barns, falling down barns, gothic arch barns, hip roof barns, and a special (to me) barn. Also there is no 'we' here, just me!

When I first started exploring the back roads barns didn't interest me much. What was I thinking?? I now think of the pioneers who built these barns and how important they were. I am kind of in awe of them now. I love big barns and I cannot lie!

The first barn is interesting as it was a CPR Ready-Made barn. These were a part of packages that the CPR (Canadian Pacific Railway) used to entice people to settle in the area. 6 'demonstration farms' were set up in Alberta showcasing everything you'd need to settle here. Here is a link to my friends over at BigDoer.com who did a wonderful post about one of these farms.  http://www.bigdoer.com/27596/exploring-history/cpr-demonstration-farm/. You'll notice my barn and the demo barn are the same. Not fancy but they got the job done.
Thanks to Jason Paul Sailer for letting me know about the significance of this barn. 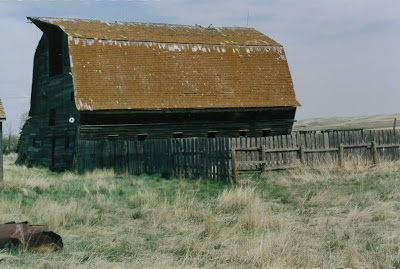 Last but not least is the barn built in 1926 by my great grandfather on their homestead in Southern Saskatchewan. This was the same year my Grandma was born, she was 1 of 12 children to be born and raised here. Her stories about growing up there are amazing and I know the barn was a huge part of her childhood. I remember asking her once what it was like to grow up the Dirty 30's, she says, " I never knew we were poor!" The old barn collapsed in 1999. The farm was sold when my grandma's brother passed away.  He'd lived there his whole life.

My Date With Anthony Hill 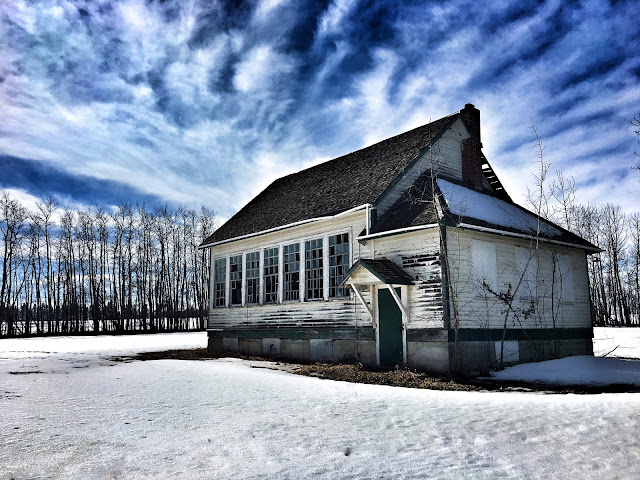 I had spotted this school during some online research and satellite photos showed that it appeared to still be there. A friend got there before I did and confirmed it's glorious existence and I have been wanting to see it with my own eyes ever since. This weekend was my time, I had a few hours and good weather so off I went. Some of the back roads still had some snow, it was melting and muddy. Other roads were just fine and some were so rutted that it felt like I wasn't in control and I was on some kind of track.  Like the jeeps in Jurassic Park. OK....so maybe it wasn't that bad but still I don't the feeling of my car moving with the ruts. 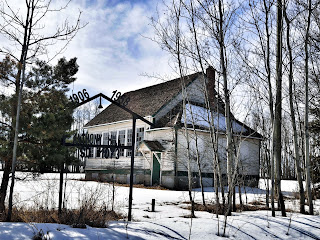 This wonderful old school is Anthony Hill, it is near Usona, AB. There isn't much in Usona now. The first Anthony Hill school was built in 1904. The one pictured here was built in 1914 to accommodate a growing number of students. The original school was then moved to nearby land where it was used as the Usona store and post office. I have read in 2 different places that USONA stands for United States of North America. In 1958 the school closed and became a community centre. It was used at least into the 80's as someone commented to me that he attended car club meetings here.


I made my way through a snow bank onto the grounds of the school, it was a slushy soggy mess. I could see into the basement through an uncovered broken window. It had some wooden benches and other junk. I tried the front door and it was unlocked, I had to take a quick peek inside. Once you are in the door you can go right which takes you down a pitch black scary set of stairs to a dungeon or hell or the basement. I couldn't be sure. The other choice is up into the main school room. I chose to go towards the light. The stairs creaked menacingly but I pushed onward and upward, it was about 6 stairs. It was a typical one room school with, you guessed it, one large room. This one did have a separate small room at the top of the stairs.  A cloak room would be my guess. The bathroom is out back somewhere. I didn't spend a lot of time in here, get in, take some photos and get out. Touch nothing and take only pictures.

I love the look of this old school and spent a while just looking at it from the outside. I feel like Anthony Hill and I are buddies now so I shall call it Tony Hill, I might even come back for a second date if I'm in the area.

I have heard of the Tail Creek recreation area but I had no idea there was ever a town there.  Mind you, it wasn't a town for long only from 1870-1878. During this time is was the largest Metis settlement in the Northwest Territories (Alberta was not a Province until 1905). Tail Creek Town had roughly 400 log cabins. Historical reports say all the cabins were similar in style, log walls, pole roofs covered with earth and straw, animal hide windows, and hand hewn doors. The insides were plastered with mud and straw and said to be warm even in a blizzard. At it's peak there was 1500-2000 people in town. Tail Creek became a staging area for hunters looking for supplies such as food, saddles, harnesses, clothing, tents, etc. Meat and hides were traded with the Hudson's Bay Company post at Fort Edmonton (which at this time had a smaller population than Tail Creek). The harsh winters were passed by dancing and gambling. I can almost hear the fiddles and foot stomping revelry that surely carried on into the wee hours.

In 1875 a four man North West Mounted Police Detachment was set up in the town. It was needed to protect the people from rumored whiskey runners who were coming to set up shop. The original bad ass Canadian, Sam Steele, was there during this period to handle the situation. He was to be disappointed though as the rumors did not amount to anything and he didn't get to arrest any smugglers.

By 1878 with the buffalo gone, the town population dwindled.  A devastating fire swept the through the area destroying everything but one cabin and the cemetery.  Just like that, gone. That one surviving cabin is at the Stettler Historical Museum.

I came upon this cemetery by accident, which is what is so addicting about back road exploring. I don't normally check out cemeteries but I couldn't resist this one. I crossed the plank bridge over the ditch and opened the gate. The cemetery is quite large but only the back corner had graves. I suppose the settlers assumed there'd be people in the area for a long time and a large cemetery would be needed.

Some Metis families stayed in the area and a plaque has been mounted in the cemetery to honour them as some of the first permanent residents of the area.

There were only a couple readable headstones, one that had fallen over, a broken cross and a dozen or so wooden crosses with no discernible writing. Seems sad to not know who was buried there, is it the people listed on the plaque? The most recent death was Isabella House who died in 1917, the other readable marker was her husband James, who died in 1897. Besides the memorial plaque, and a Metis flag, there was some fabric pieces (I have been told these could be prayer cloths) on the entrance gate and an old shovel on a tree. I felt a touch of melancholy looking at this place that seems almost forgotten. I think though that as long as myself and others know about it, it won't be truly forgotten. 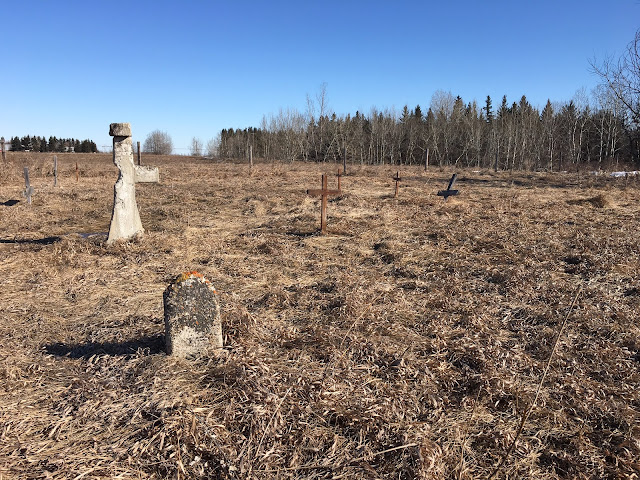 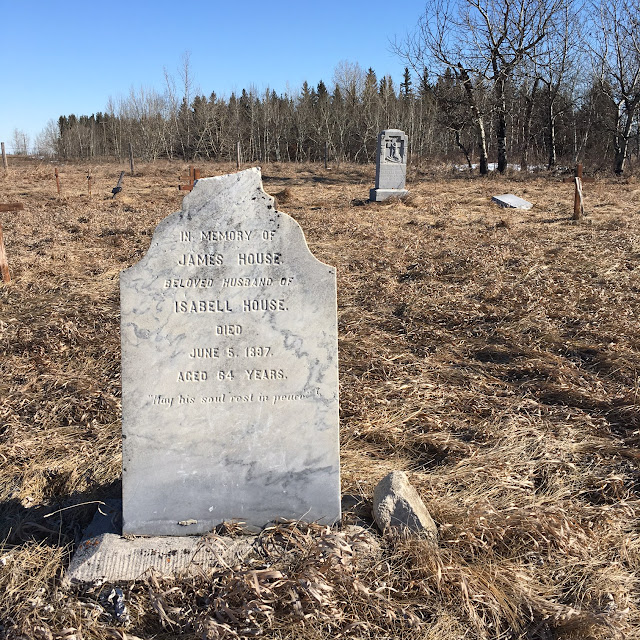 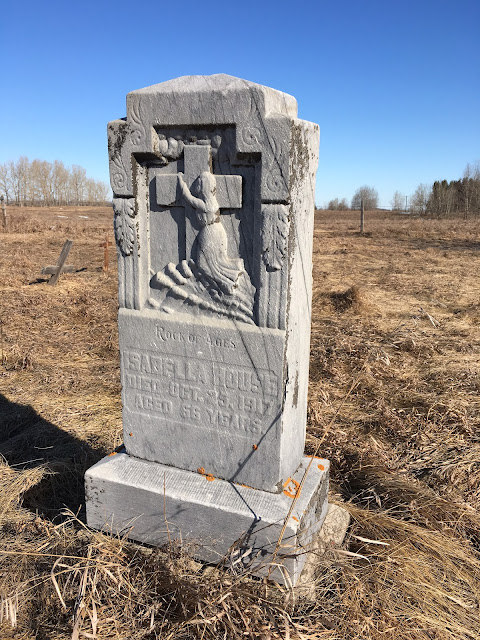 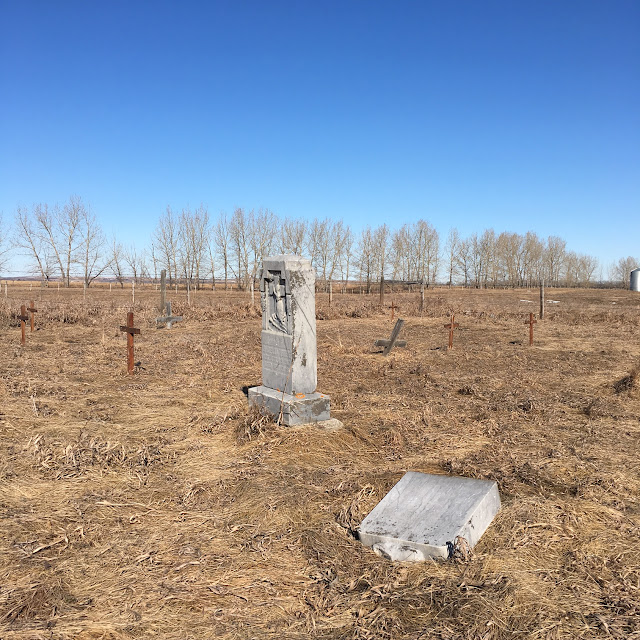 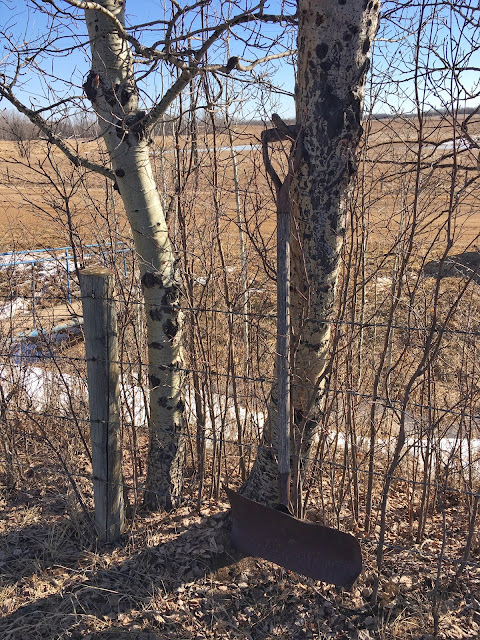 These are a Few of my Favourite Calgary Things

Have you ever been to a dueling pianos show?  If not, I highly recommend it.  I went last night with 7 other ladies out without their kids and most of us moms needed a night out...badly. It was a great night and subsequently blogging is hard today.

I have mentioned before that I was born and raised in Calgary and lived there for over 3 decades until 3 years ago.  I have seen lots of changes over the years, I used to live near the edge of the city and played and rode my bike in dirt fields and now there are houses as far as the eye can see. The old saying, "you can get anywhere in 20 minutes" used to be true and I could get just about anywhere I needed to go in 20 minutes.  Now I could maybe do that at 3am. With no traffic. While speeding. There are communities I've never heard of and it seems like the drivers have become even worse every time I come home. Still it's home and I love it. Nothing beats the view of the downtown skyline with the Rocky Mountains in the background.

I have been going through some of my photos and love remembering what I was doing when I took each photo. I also see lots of photos I've taken, and the building or sign is now gone, which is sad.  Some places though have been restored or renovated which is nice to see! Always good to preserve history, I wish it happened more.

No post of mine, about Calgary, would be complete with out mention of Eamons Bungalow Camp. This used to be along Crowchild Trail in NW Calgary and was a "One Stop" Tourist Centre, drive in diner, gas station, and motel. I can just picture all the cool 50's style cars stopping here on their way west!

It opened in 1949 and closed for good in the mid 60's when the Trans Canada highway was completed and this route became less traveled. It was eventually moved to make for development and the Tuscany C-Train Transit expansion. The actual service station building sat in a city storage yard for years as it's fate was decided. It was eventually sold for $10 after costing the city to keep it in storage. Not everyone saw the value in this piece of history but I am sure tax payer dollars have been spent on more foolish things. It was purchased in 2016 by a non-profit group called the River City Classics, who are restoring the garage. Great to hear!! The city did refurbish the sign and installed it as art at the train station.  Love it!

Fun fact about the Eamon's site, in 1986 it was used in a music video by Canadian signer Corey Hart called I Am By Your Side.

Here are some more of my fave signs from around town:


This barely touches on my favourite places and photos of Calgary, but after several years exploring Calgary I have accumulated a lot of photos.  More another day!


I have seen several old school houses that at some point were covered in a hideous looking faux brick looking asphalt shingle type material.  I am sure at the time it was cost effective and seemed like a good idea but it looks terrible and covers up the original school which is what I like to see. I'm also sure it was done with good intentions to prolong the life of the building. Still, it's ugly. Just my opinion...stucco and siding covered schools will be future posts haha.

Despite their unsightly exteriors they are still schools and they still exist. Which is all that matters, since so many were torn down, moved, or dismantled.

Prepare to be schooled: 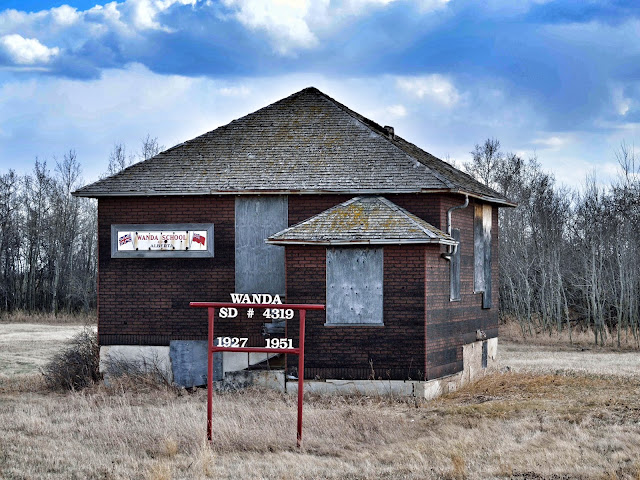 That's it for today, short and sweet. Thanks for visiting.