The Cummings Sawmill: From Saginaw, MI to Gull Lake, Alberta 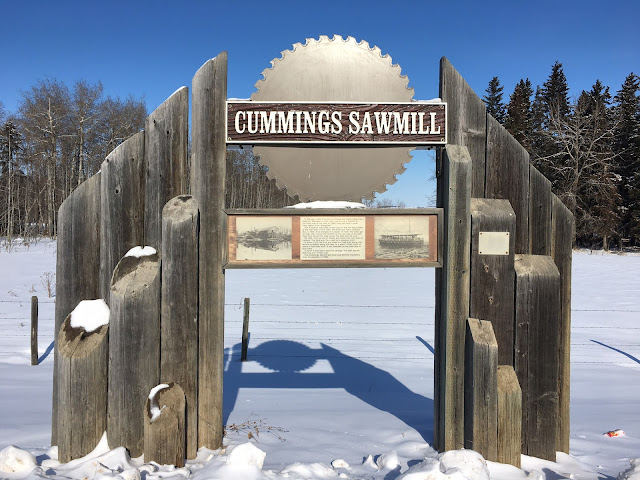 I always stop at roadside signs, you never know what you'll learn. Found this as I was cruising by the west end of Gull Lake. We have enjoyed many days on the beach at Gull Lake so it's cool to learn something about it's history.  The marker reads:

In the year, 1898, Thomas Cummings and family came from Saginaw, Michigan to Gull Lake, and set up a sawmill on the west side of the lake.  In 1898, they also built a boat. They called it the "Kangaroo"
The Kangaroo was used to haul logs to the mill and lumber to the east side of Gull Lake,  The boat was first a sailboat. But, in 1900, they changed it to steam. In 1900, the water got so high, they moved the sawmill to the east side of the lake, They hauled the logs across the lake with the boat.
By 1906, they ran out of timber and moved the mill west of Leedale. The boat was then used for a pleasure craft.
In about 1915, the boat got loose in a bad wind storm and drifted northwest along the lake, to a point 2 miles north of where it had been built. It was beached on the west side of Gull Lake.
In 1916, it was taken apart for salvage. The boat was 84 feet long and 19 feet wide.
The Cummings Sawmill and boat was the first machinery west of Lacombe, in 1898.

Here are photos from the Glenbow Archives, the same ones on the marker: