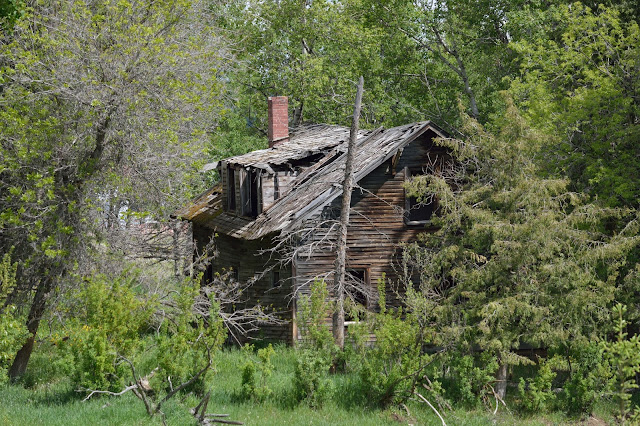 I was skeptical when my boyfriend told me there was a old house I'd like right by his shop, near Rimbey, AB.  Skeptical and dubious (I like that word).  But....just....maybe on some level he is paying attention when I make him look at my photos...maybe the cursory glance and the 'uh-huh' or 'that's nice' weren't so superficial?

﻿
Again, still skeptical as we are heading there. LO AND BEHOLD,  I see it through the trees and it is fantastic!  A couple phone calls later and we are at the house of the man who owns the land that the old homestead is on.  I ask for permission to get closer to the house and he says in a slow, not overly friendly way, "wellllll I suppose you can do whatever you want."  I chatted him up a bit more and by the end I couldn't get him to stop talking.  He was great!


As well as learning about him and his family and their connection to the area, which was extensive, he gave me a bit of info on the old homestead.  He bought the land in the late 50's and the house was vacant then.  A family of 5 had lived there, but they left everything and went home to England.  He said the house has been picked clean over the years by vandals.  There also used to be a log barn,  but it accidentally burned down at some point.
I spent as long as I could wandering around the old house.  Just listening and looking, wondering where that family is now.
I was glad that I got to see this house, even though finding things myself is part of the fun.  He hasn't found me anything else of interest (and he travels all over to get to different job sites), so I chalk this discovery up as a lucky one-off.