I found this little church on a gravel road not too far from home and near Eckville, AB. I would have seen it last year but I turned a road too soon and missed it. At that time last year, I was chasing a school and found it's marker. The church was literally on the corner after the one I turned at. It's hidden in the trees so you can't see it as you approach from the west.

The signs on the church say this was the Sunshine Gospel Mission, Established 1946. It looks like there was once a cross on top and the bell is now missing from the tower. The inside (as seen through the open windows) is empty, except for water damage and pigeon poop. I did not venture inside.

In 1946, 3 acres was bought from the government and materials purchased to build the church. It was built by volunteer labour. The church was furnished with 54 chairs, an organ, pulpit, oil furnace, hymn books and book cases. A Ladies Aid was formed in 1950. Part of their duties was to look after the church.

A temporary closure was noted sometime in the early 1970's, but I could find no mention of when the church was last used. Memories from homesteaders in the area recall the wonderful Christmas Concerts and summer picnics with all the pop and ice cream you could ever want. It sounds like a wonderful place where the community could gather. I am sure anyone who knows the church, and passes it today, must have a mix of happy memories and also feel a bit sad at it's current state.


Here is the marker for Estonian school that used to be located just west of the church. I have never seen a marker like this. Unfortunately it looks like there was once photos of the schools, but they are gone now as are the schoolhouses. 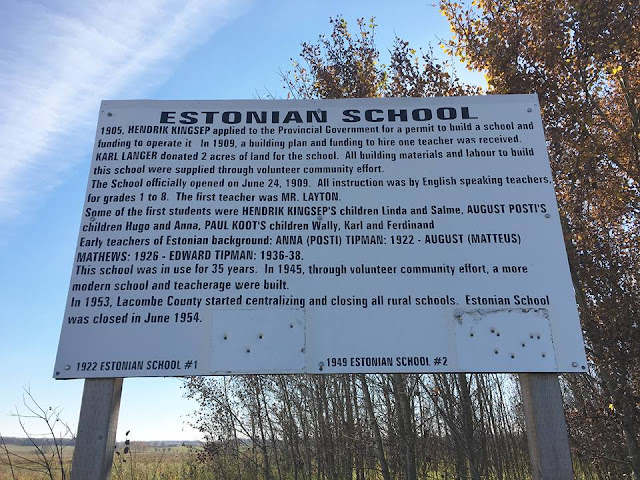 References: Homesteads and Happiness
Special thanks to Fallon Elayne Moos, who helped me find this place.