I live in Central Alberta, and it's not too far to some amazing natural wilderness playgrounds. I packed up the car. Camera, snacks, extra clothes, kid. I told my son (7 y/o) that he should be playing with his imagination but that didn't go over well so I also packed the iPad. When I went on road trips as a kid...we had mad libs and word games like name a place beginning with the last letter of the previously named place. I would say Alberta..then someone would say Arkansas...etc etc. Also spot the weird license plates was a good one. I also had siblings to fight with. I wish I'd had an iPad.

First stop, Nordegg. Once leaving Rocky Mountain House there is next to nothing until Nordegg. Not even cell service in certain stretches of the tree lined highway. It's beautiful and peaceful. Nordegg was a coal mining town that came to be when Martin Nordegg discovered coal in 1911 and soon started the Brazeau Collieries. The Canadian National Railway arrived in 1914. The town boomed to 3000 souls and had many amenities including a hospital, fire hall, pool hall, hotel, bank and a Trading Company. Tragedy struck the mine on October 31, 1941 when a massive explosion killed 29 miners. Declining use of coal finally did the town in and the mine closed for good in 1955. Most of the town is gone but a few buildings remain. Almost all of the processing plant buildings of the Brazeau Collieries are still standing and the area was designated a National Historic Site of Canada in 2002. The mine site is open in the summer month for tours. I will definitely be going back!

Next stop, Abraham Lake.  This lake was created in 1972 with the building of the Bighorn Dam. If you google pictures you'll be amazed at the photos of the frozen methane bubbles. I was not able to get good photos of the bubbles this time around, but had a nice walk....despite the very windy conditions. Here is a link to the famous bubbles: https://www.canadiangeographic.ca/article/intriguing-photos-alberta-lakes-famous-bubbles

Last stop on 'The Road Less Travelled' is Crescent Falls. I had never been down this road and stopped at a small parking area and look out.  I assumed this was the falls but no water was flowing and could not see anything but cliffs. I found out later I had to keep going up the road to see the frozen falls. Another day I guess! This area is great for camping and hiking and general outdoorsiness and I am excited to come back in the summer! 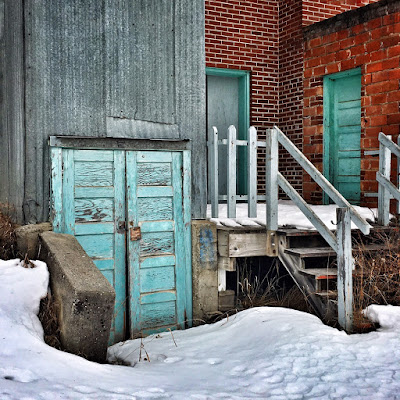 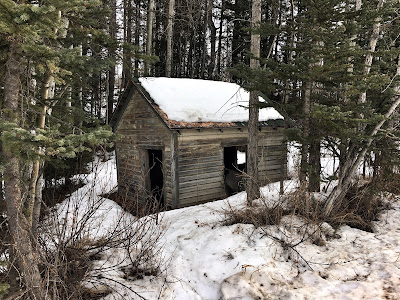