It has been over 2 weeks since I posted. I keep meaning to find a few moments to sit down and write a post but something always seems to get in the way. Also, I have not found the time to get out and explore in awhile so I had to improvise and drive down the highway to a spot I had made a mental note to stop at sometime.  I have a few of those spots close by, in case of emergency. Today was an emergency.  I have been cooped up for a few days, my son was sick and then I got sick, we even had to miss family Easter Dinner in Calgary. Fear not, I cooked a turkey today so I didn't have to miss out entirely. I am usually in charge of cranberry sauce when I go to family dinners and always make my own. Did you know you can't get fresh cranberries here this time of year? Or so the kid at Sobey's said. I had to get can-berries..it's just not the same as mine. SMH, as the kids say/text.

I always admire the photos I see of old vehicles that people just seem to find sitting in fields or somewhere. I always wonder how the ended up where they did and who they belong to. I've driven my share of back roads but rarely seem to see old vehicles. I've found a few but other people seem to find them easier than I do. It's makes it fun when I do see one though.

I headed out to the 'emergency' truck I have seen a bunch of times just west of my town, maybe a 10 min drive...if that. It made for a good photo and took a slight edge off my need to get out exploring. I swear it's like an addiction. 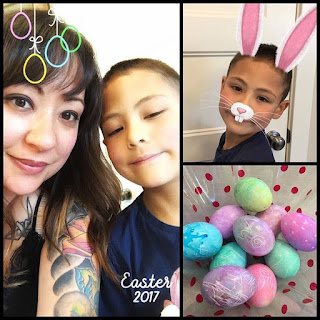 Also because it was just Easter weekend, here is a bonus photo! Even though both my son and I were not feeling too chipper we did dye some eggs and had an Easter egg hunt around the house on Sunday. Since my kiddo is not a huge fan of chocolate, the Easter Bunny brought him some Lego, which kept him occupied for at least 20 minutes.
This was not the weekend we all had planned but I guess we made the best of it. Also it's the playoffs so lots of hockey to watch!
Have a good week everyone and I will try and post more often.