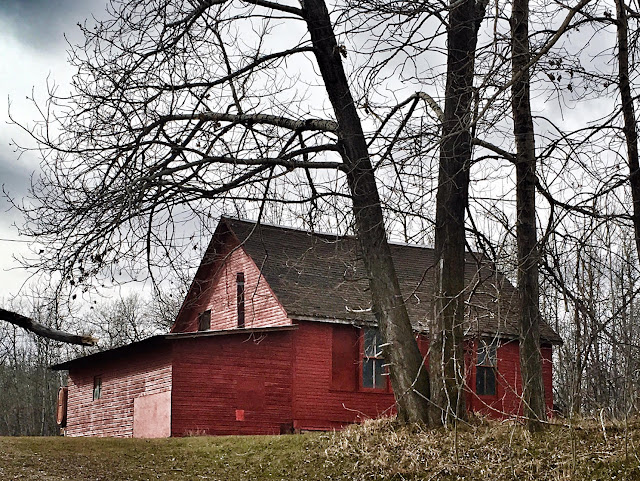 The Sunset Hills are just west of Bentley, AB.  The highest peak is just under 3400ft, making it the 1270th highest in Alberta.  Oooh ahhhh, okay so not the Rocky Mountains, but it's still a picturesque area.  I was on my way to look for a old abandoned house that someone had mentioned was 'a bit' west of Bentley.  Not much to go on but I did find a house!  It turned out to be a 2 for 1 trip when I caught the unmistakable profile of an old school house across the highway tucked into a clearing in the trees.

On my initial trip I took photos of both the house and the school from the roadway.  Both are in areas that are fenced off.   I drove to a farm at the bottom of the hill and was hoping to inquire about the house, but no one appeared to be home.

The school house had no marker and I did not know anything about it at the time.  After a bit of research (internet FTW!), I discovered it was the aptly named Sunset Hill School.  It opened in September of 1913 and closed when centralization occurred.  This was likely in the mid 50’s but I don’t have the exact date.  According to the Bentley and District Early History book, students had slate boards and pencils which they could make squeak and I’m sure this drove the teacher crazy. Eventually the pencils were replaced with pens with removable nibs and ink wells in the corner of the desk.  The ink would freeze on cold days.  How far we’ve come in 100+ years, from slate tablets to electronic tablets!  The school then became a honey extraction plant owned by Norman Pearson.

On a subsequent trip by the school (I had stopped to look again) an older gentlemen was coming down the road and stopped.  We chatted and I asked if he happened to be Norman Pearson.  Indeed he was (yaay for research!),  he gave me permission to go onto his property.  I was hoping he might let me inside but he never offered and I didn’t feel like I could ask.  I kick myself now of course for not asking.  He went on his way and I happily walked around and took a few photos.  This is another place I stop and look at when I’m in the area, maybe Norman will come down the road again and invite me for a tour.  Stranger things have happened.