I found myself with an unexpected afternoon off this week as I was driving from one town to another and didn't need to return to my office. The landscape around me had transformed into a frozen monochromatic wonderland so I got off the main road and hit some familiar backroads. Luckily the sun never really came out that day and the frost stuck around for the whole day. I could've just driven for miles and miles just to be surrounded by it for a bit longer. 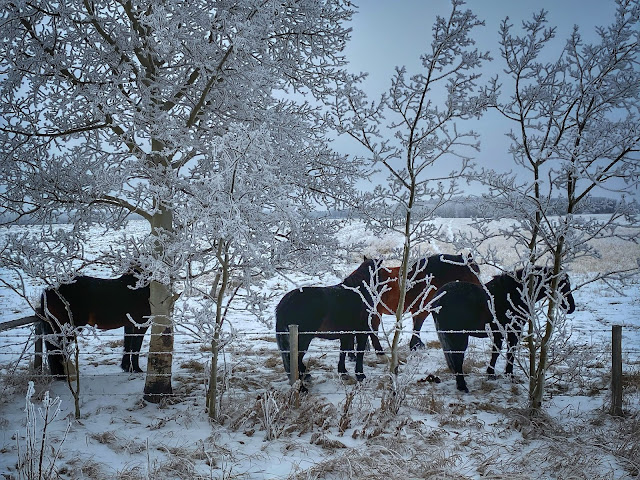 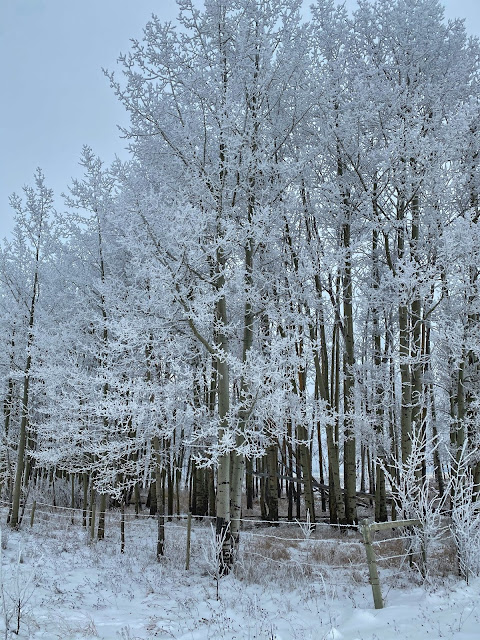 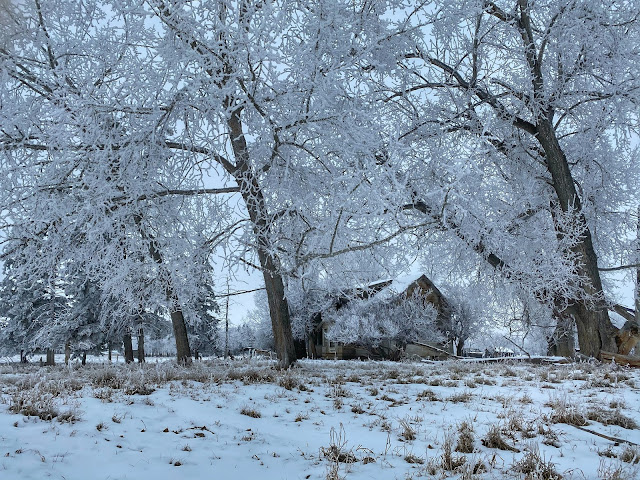 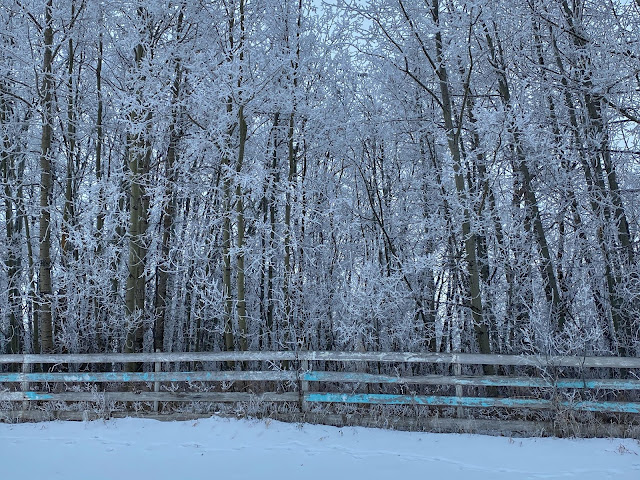 West of the 5th went West of the 3rd this summer on a brief trip to the capital city of Saskatchewan. Yes, my summer vacation was in Regina. Not the summer one dreams of but with travel and gathering restrictions in place we couldn't just jet off somewhere exotic, not that we had planned to anyway but the point is we could have in any other year. We did get to meet up with some family and I was able to explore. Win/win under these circumstances.

I had nodded off while on the road (something I can do within a block of leaving home, it's like my superpower when I am a passenger), and missed Netherhill on the way. I declared that we would be stopping there on the way home.

I had seen pictures of this school many times and could not simply pass it by! View a great article and more pictures HERE by my friends over at BigDoer.com.

I had been watching the weather and was hoping for some cloudy skies, because I love a cloudy dramatic sky and that it is how I pictured this school in my head. It was not meant to be. 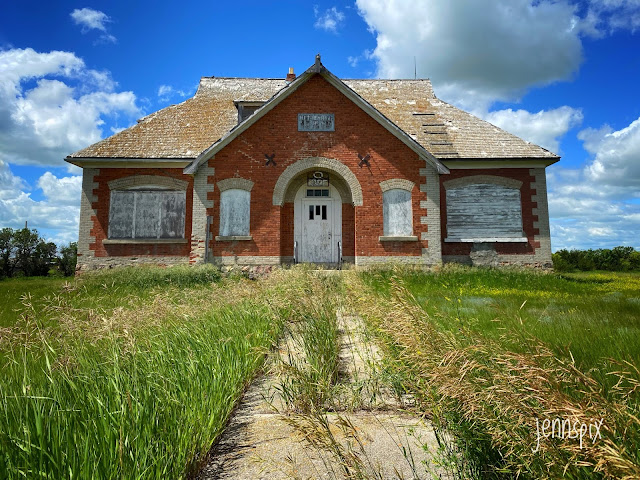 From the book, 'Memoirs of  Hillsburgh Rural Municipality No. 289', it states that Netherhill School was built in 1912, and received additions. Miss Railton was the first teacher and it was later consolidated with Eagle Lake School.  I have no dates of when it closed as a school, but above the door is the IOOF logo, so it became an Independent Order of Odd Fellows hall for a time before it was boarded up.

I found an image of the school prior to the additions at pararie-towns.com:

Once you pass the school, there is a town, population of 25 according to the 2016 census. It was pretty quiet and we did not see another person. We found the hotel next to the railway tracks though....which is almost a given in most of these prairie towns.
Posted by Jenn at 1:08 PM 28 comments:

Back in July I had the opportunity to take a free plane ride over the town I live in. I wasn't sure I wanted to though. I have been in helicopters but for some reason this plane seemed more daunting.

This little plane is smaller than the inside than my car, but I figured why not, I won't get the chance to do this again for free! So I squeezed in with the pilot and 2 colleagues. There was room for us and a fire extinguisher squished between the seats.  Which if we had needed the fire extinguisher at any point.....it would probably have been too late for us. So I dramatically texted my son that I loved him and got in. YOLO!!

It was a hot day so as we sat idling on the runway we kept the doors open, and as we are taxiing along about to take off, the pilot then shouted that it was time to close the doors. They had to be slammed  closed a couple times, much like the first beater car you, or someone you knew, had in high school. Comforting.

Once we got off the ground it was much cooler in the plane and it was a fantastic feeling!  It was also a great time to fly as the canola was in bloom and made beautiful patchwork views.

Here are some images from the flight. I could even pick out my house as we flew over town. 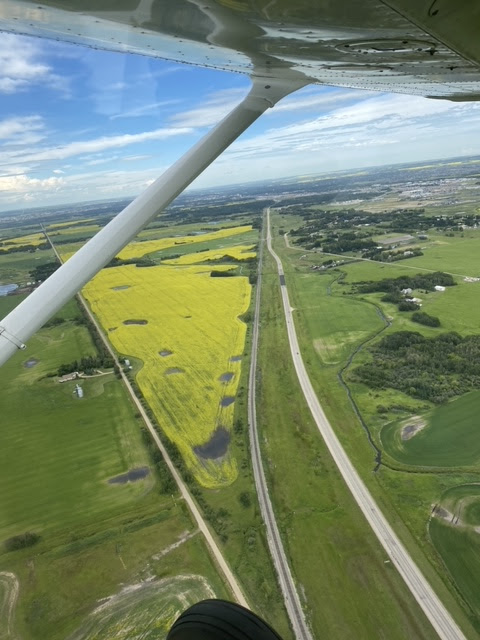 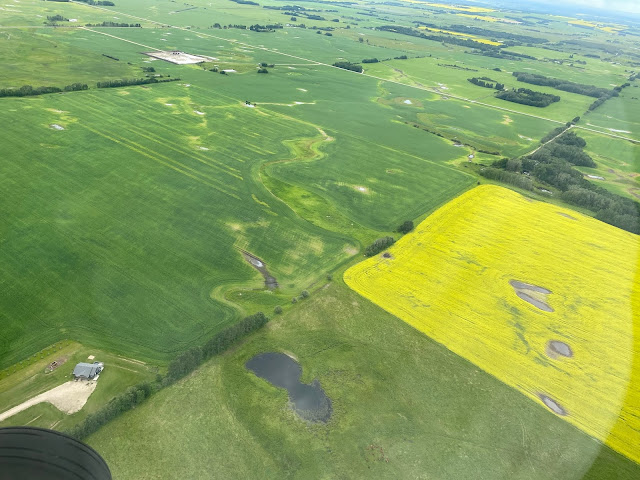 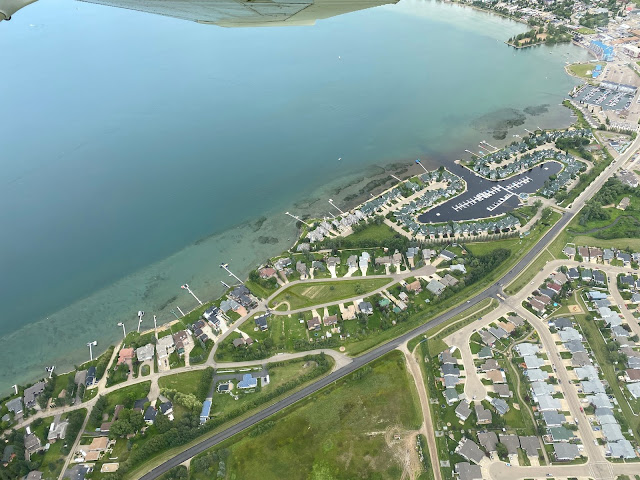 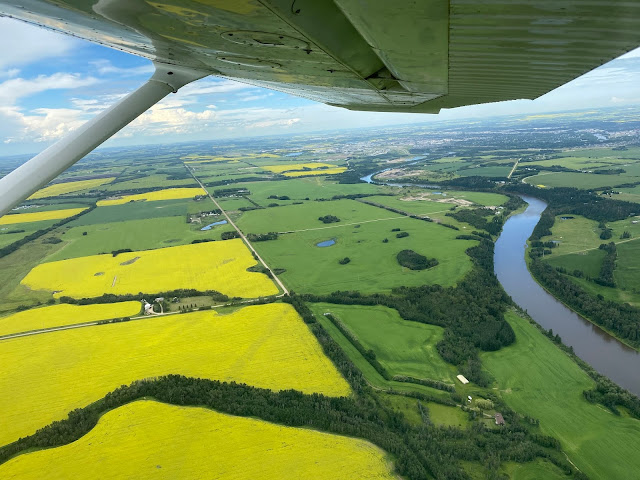 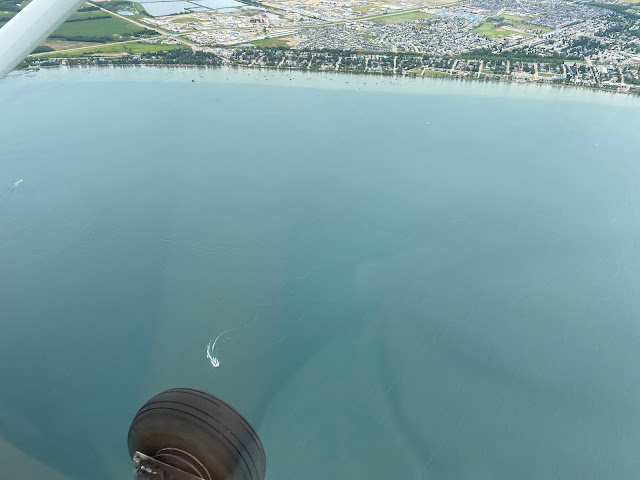 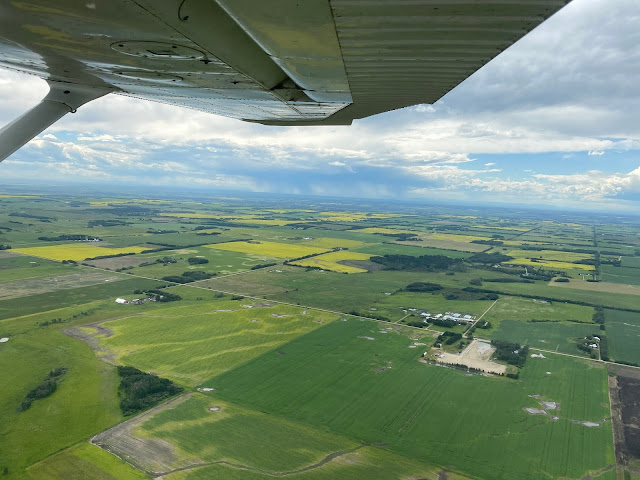 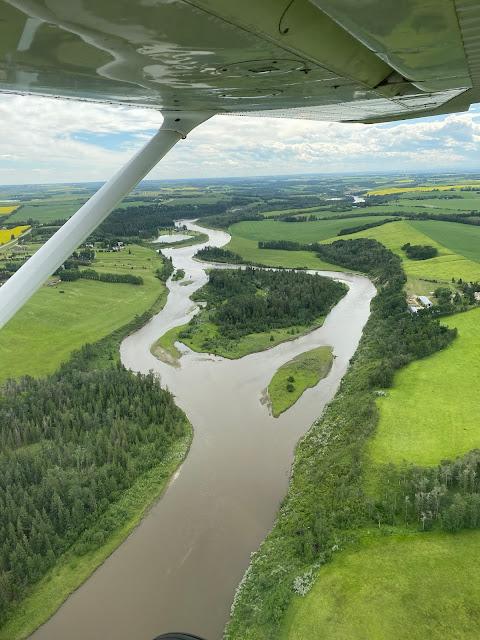 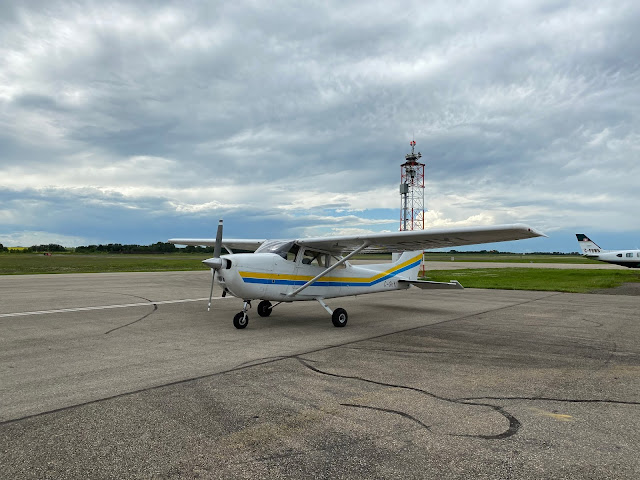 Once I got over the initial trepidation, I was thrilled to have done it. Which I am sure is some kind of lesson to just face my fears or quit overthinking all the time.
Thanks for reading!
Posted by Jenn at 1:38 PM 26 comments:

Three of a Kind

I won't bore you with what I have been doing the last few months...I would bore myself as it feels like it has been a whole lot of nothing, yet busy at the same time.  I hope everyone is safe and healthy and I hope all my American friends and readers have voted.

Here are a couple pictures from August 2020.  I don't normally take pictures of granaries but I like the first image as they are old wooden bins and I like the second image for the sky and canola.  Interestingly these bins are close together but one on the east side of the road and the other on the west side. A brief but intense thunderstorm followed not too long after these images were taken. 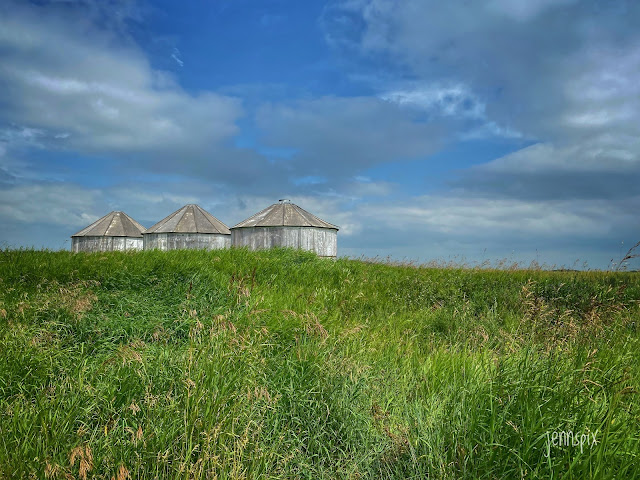 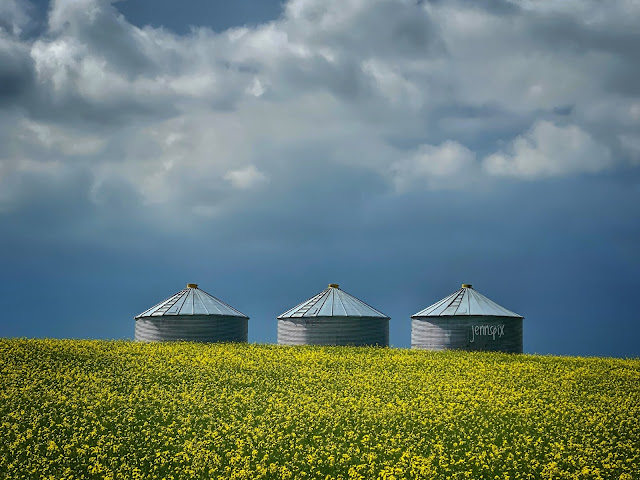 Thanks for sticking around for my sporadic posts! I will catch up with all your blogs soon. 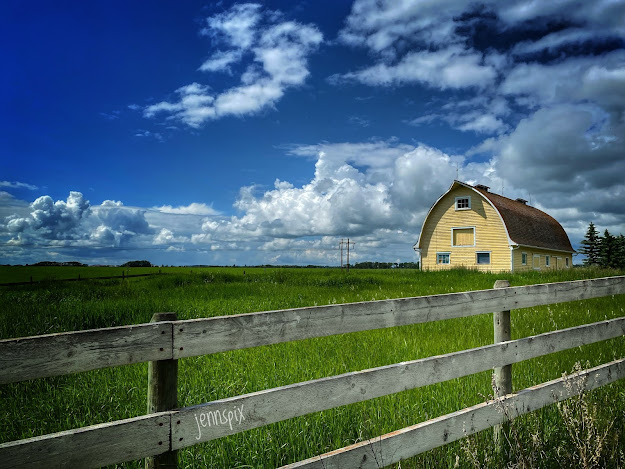 I love a classic red barn but this cheerful yellow barn is a lovely sight!
Have a great weekend everyone. I am slowly working my way to everyone's blogs to catch up.
Posted by Jenn at 12:00 PM 21 comments: 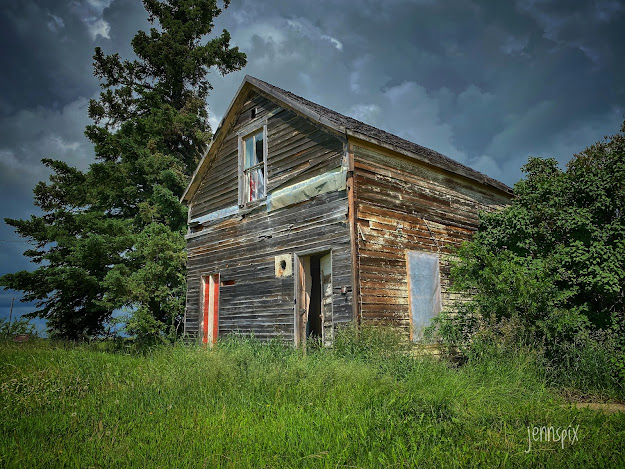 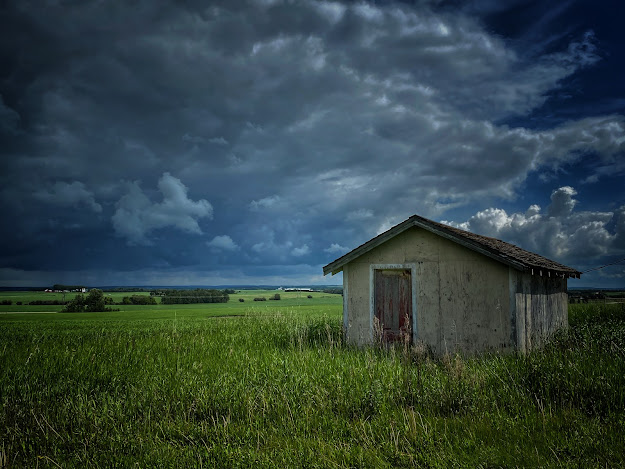 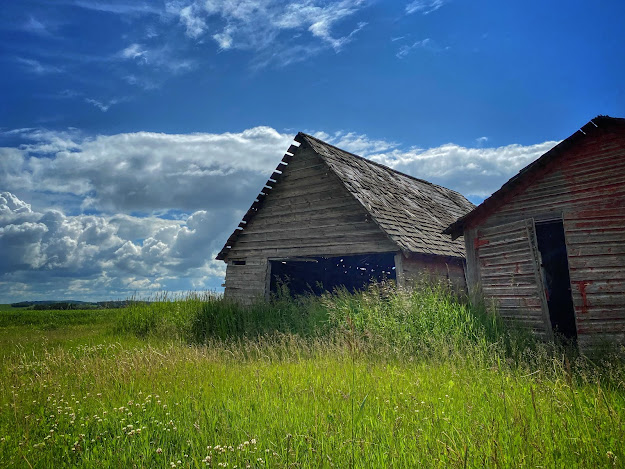 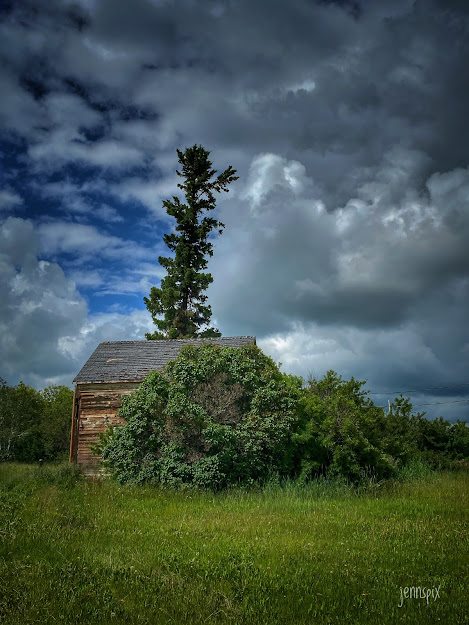 As always, thanks for sticking around and reading my sporadic posts. I have a backlog of images to post so I am hoping to get them all blogged soon! I hope everyone is safe and healthy. Take care.
Posted by Jenn at 3:30 PM 20 comments:

The history of this church starts in 1897 as German settlers from the Volyhnia region of what is now the Ukraine, emigrated to the 3 prairie provinces of Canada to start a new life. By July of 1897 a congregation was formed and the all German Sunday Services were conducted in the homes of the parishioners. In 1903 land became available and the church was built. During the tough times of the 30's members remained dedicated and the church was enlarged and a basement added. I would think this the same time the front of the church changed as well.  The first English Services happened in the 1940's, and electricity was added in the 50's.

As with many of pioneer settlements, farms change hands, the older generation passes on and more of the young people move to the surrounding towns and cities. An article I read from 2015 said there is still 2 services a month and the volunteers keep the inside and the grounds looking immaculate.

There is over 120 years of history here at this little country church and I am happy to have learned a bit of history today that I didn't know yesterday. 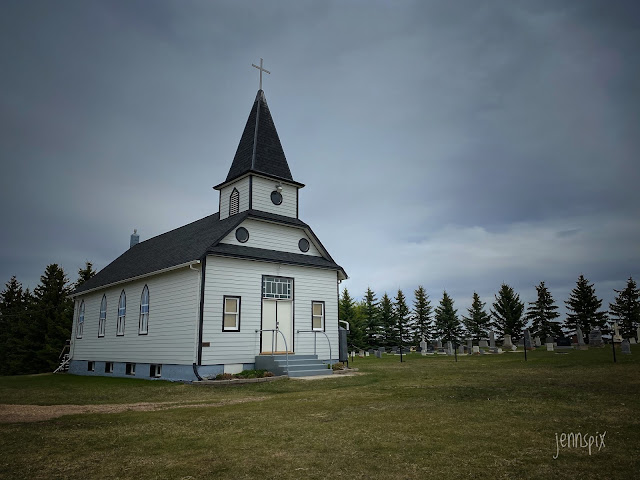